2012 ends with on a high note! Reflections on the Aperture Book Party

First of all – Happy New Year to all my friends, family and fans out there! If 2013 is anything like the year that just passed, then I simply won’t have enough fingers, toes or hairs on my head to count all my blessings. As I look back on 2012 I give thanks for so many things, but among them are these: the publication of my new book Harold Feinstein: A Retrospective (Nazraeli, 2013), a great retrospective show at Panopticon Gallery in Boston, an installation of 52 of my large format color botanicals at Stanford University’s new state of the art concert hall, and the truly joyous book party at Aperture a few weeks ago!

There were so many wonderful things about my book party at Aperture on December 17th that I hardly know where to begin!

So many people showed up on a rainy night close to Christmas and helped fill the gallery with warmth and general merriment. Sean Corcoran, photography curator for the Museum of the City of New York, moderated the opening conversation that included longtime friend, A.D. Coleman. We showed a short film from my teachings tapes, which are in the process of being edited by my wife, Judith, and later on friends in the audience were invited to ask a few questions and share comments and thoughts. The most memorable part of the evening for me was how many of my former students came – spanning from 1958 to 2004. While my again braing doesn’t remember all the names, I can never forget the enrichment I’ve received from each of my students. At nearly 82, I spend a lot of time reflecting on the things that matter the most in life, and I would have to put my relationship with my students right up there near the top.

Aperture sold out of the books on hand and a number of framed prints and other posters were sold to benefit the Hurricane Sandy relief efforts sponsored by North Star Fund and Coney Island Recovers. The benefit continues on-line, so please take a look and do what you can to support the on-going needs for hurricane recovery!

Since every photographer knows the truth to the saying “a picture speaks a thousand words”, I will let this small photo album share the rest of the story. Many thanks to my longtime friend and former student, Peter Angelo Simon, for providing these photos! 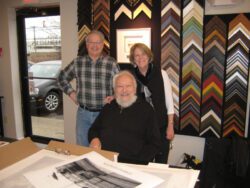 Getting ready for the benefit, book party and reunion at Aperture December 17th! You’re invited!

Thank you for sharing so many pictures! We were sorry we couldn’t attend the celebration and seeing these wonderful images gives us a joyful sense of the evening. Wishing you and Judith and Cherie a splendid 2013 – with lots of love, Barbara & Gene

Thanks Barbara! And we’re wishing you both a great 2013 too. Let us know if you come east this year. Would love to see you again!

soory I missed you this time around. But I was so happy to see you in the Boston show. You are by far the best teacher I ever had in anything. I remember well when on the first class you took us out for a walk in the neighborhood. Without a camera! We saw the reflection of the Flat Iron building in a puddle of water. You were teaching us how to see with our own eyes and mind and heart. And then you gave us the assignment of shooting without looking through rangefinder, and also to prefocus. So that… Read more »

Thank you Charles. You’re reminding me of so many wonderful times! Life is still pure theater and I’m glad to still be in the play! Wishing you the best in 2013. Come for a visit sometime…and keep taking pictures!

Although I was geographically unable to attend this momentous event, I felt a part of it by way of these photographs and enjoyed the spirit of adulation and appreciation. It was indeed a Celebration!

Sending you both my love,

Toba: You were missed, but we’re grateful we were able to see you at our home several months earlier. Hope we have a repeat of that visit next year!

Dear Harold, Your work is an absolute treasure and I am still upset I missed this evening. It would have been wonderful to attend but alas work and my commute from Long Island meant I could not make it on the day. i fist came across your photographs during the exhibit “The Radical Camera: New York’s Photo League, 1936-1951” put on at the Jewish Museum of New York a year or so ago. Your photographs stuck out to me there. By coincidence I studied with my neighbor in Brooklyn Peter Angelo Simon one day a week forr eight weeks in… Read more »