Last Saturday, March 26th, marked opening day for the 2016 Coney Island season and the first 100 people to line up for the Cyclone got a free ride! Harold must’ve been salivating! I’m not sure when his last ride on the Cyclone was, but I bet if he could’ve taken his wheel chair on board, he might’ve taken a ride on his last visit in 2014. The fact is, his very first blog post in 2012 was dedicated to the Cyclone’s 85th birthday!

In 1991, Leonard Lopate interviewed Harold during his one-man show, A Coney Island of the Heart, at the International Center for Photography. Lopate, who hosted WNYC’s radio program New York and Company, was asking Harold about the changes at Coney over the decades.

Lopate: “[The Cyclone] is something that that has remained a constant. While other things have come and gone. Did you ride the cyclone as well?”

Harold: “Oh of course! I mean I always rode the Cyclone. I was one of those kids that would stand up in the front car as it was going over The big first hill and wave my arms and show off. And that came in handy when I first started photographing because I would literally sit in the front car and turn around in the seat and photograph the kids screaming behind me.”

Lopate: “There is a picture of you on the Cyclone doing that, and it looks as though it must’ve been dangerous. While I am deathly afraid in that seat, you were turning around and holding your camera still to take pictures of other people!”

But sometimes he sat in the last row, as in the picture to the right, where he could catch the line of seats in front of him being pulled up the first climb in anticipation of the big drop!

At other times, as in the photo at the beginning, he liked to catch the action standing below the Cyclone as it’s passengers were reeled into the heady thrill of hurtling downward at 60 miles per hour.

The photo below was the subject of an August, 1956 Modern Photography article on the use of various lenses. For those interested in the technical side of things, the snippets from this article appear below the picture. Long life the Cyclone! 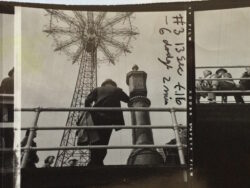 Of all Harold’s wonderful work, his Coney Island photos are always my favorites. They make me laugh, or pause and wonder, and connect me with the bizarre, amazing species we are all a part of. They never make me sad and that is Harold’s greatest gift to me, and I suspect to many others.

So magical and filled with such joy!

Yes indeed Marion. Great to have you as a reader!