Walk Through a Gallery with Harold Feinstein: A Lockdown project from Carrie Scott and David Hill Gallery

In 1989 the Edwin W. Zoller Gallery at Penn State University’s School of Visual Arts launched a retrospective of Harold Feinstein’s work.  Spanning his career, it included images from the 1940s to the late 1980s.  During the exhibition, Feinstein walked through the show, discussing his work and approach with the curator and students.

During lockdown the audio recording was rediscovered and has been restored to make this short film.

To hear Feinstein speak about his work is a rare privilege, and stands to teach us much about the art of seeing. In Harold’s words (speaking about the image below):

“You have to see people through the eyes of someone who loves them; from their lover, their wife, their child.  You have to see them as if you were that close…and see the sweetness. And we forget that.  We have attitudes… to age groups… to racial groups… whatever it is.  And then we’re no longer responding to that soul.”

This film was co-produced by Carrie Scott and David Hill Gallery.

“One of my favorite American photographers, Harold was blessed and embellished by love and the light within. He was a big influence.” Larry Fink 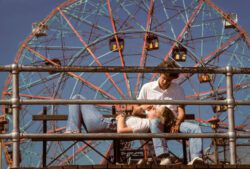 What’s the July 4th week-end without Coney Island? Will apple pie be the next to go?