About this photograph
black and white / draftee

What will they think of next? A friend brought it to my attention yesterday that a photo of mine has gone viral… only it’s not the original photo, it’s a photoshopped version that appeared in the Huffington Post. Some clever person has made this unsuspecting GI disappear into thin air (maybe that’s why we don’t find too many photo booths around anymore!)

Interestingly, a week before this gimmick was brought to my attention I received a phone call from a guy in North Carolina asking me whether or not I know the name of the GI? He thought it might be his father.

Alas, I don’t, but I can pretty much imagine what this guy was going through. I call this photograph “Lonely for my love.” He wants to send a picture of himself to his sweetheart since he’s about to be shipped out and doesn’t know if or when he’ll be back. I was about to be shipped out myself, though I didn’t know that at the time. I don’t know what happened to this guy, but I hope he made it back home safely to those he loved.

For me, the only good thing about being shipped to Korea was getting some wonderful photographs of guys just like me who were doing their best to make the best out of a terrible situation. 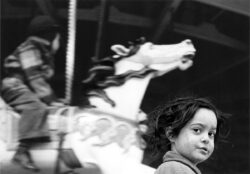 Coney Island Memoirs: Happy Birthday Cyclone and horsing around on the carousel