As a street photographer, my typical modus operandi was to set my camera to automatic exposure (if possible), with great depth of field and bring lots of film, which I bought 100 feet at a time and rolled onto cartridges myself. This way I had my camera at the ready and could just click away whenever I saw a picture, which was pretty much all the time.

Obviously, night shooting requires a different approach. Because there is less light, you have to focus more carefully. The lens is usually wide open providing you less depth of field. In the daytime, with the lens closed down to f16, I could act quickly and focus approximately rather than specifically. But at night, the pay-off for a bit more preparation and patience is a level of intimacy and a quality of light you can only get at night.

Night shooting at Coney Island meant — in some cases — seeing the lights themselves as “subjects”. Rarely does this occur in day time shooting where the sun is implicated and crucial to the mood (front lit, back-lit, in shadow, etc.), but not often the subject.

Time exposures at night make the lighting the main subject of the photo and allow movement to be expressed in gorgeous patterns. I could probably count on both hands the number of times I have used a tripod, but the photograph above (Watching the Gyro, 1949) and below (The Hurricane, 1949) required one. They were taken with my Rolleiflex Automat Model 3, utilizing a 1-2 minute exposure with the aperture wide open and resulted in photographs that really give you an understanding of the thrill of being on these rides! (You didn’t want to ride either of them on a full stomach!).

In a place like Coney Island the lights at night really express the personality of an amusement park — alive, glaring, all lit up! (The same could be said about another of my favorite night spots, Time Square, which will be the subject of subsequent posting). Here the ticket seller has some stiff competition from the lights of the amusement ride, which seem to scream out for attention saying “don’t look at him, look at me!”

In night shots, attention is held more or less on the areas the night light is revealing making for a particular kind of intimacy with the subject, such as this photograph of a father with his son.

Here the light coming from behind and above the artist illuminates both his portrait and the portrait’s subject. By sacrificing depth of field I’ve focused on the portrait and brought in the sitter as a kind of echo of the drawn object.

This night scene reminds me a bit of the dramatic use of stage lighting in a theatrical piece where the spot-light shines on the couple while there is barely enough light to show the children.

With this photo of Steeplechase Pier, everything is at a distance, making depth of field unnecessary, so I kept my lens wide open. Available light consisted of the single pier light illuminating the people fishing in the foreground and creating the added effect of sparkles below.

Finally, where beach and ocean call out to people under the daytime sun of Coney Island, it’s the boardwalk that truly sings at night. Each booth seems to glow and call people in out of the night shadows like a kind of urban campfire. Day or night, Coney Island is a photographer’s paradise. 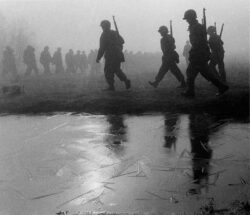 Remembering the Forgotten War: Reflections on the 60th Anniversary of the Korean War armistice, July 27, 2013

Hi Uncle, Once more, even after almost six decades, your photos blow me away. However, what is new for me are your words, your descriptions of how the photos were done, even some techie stuff. While I do not doubt the truth of your words, I feel they are like a slight-of-hand. Like any magic trick can be explained, the truth of the illusion lies elsewhere, in the mind, where I think your photos birthed forth, unique and untempered by techie stuff, like, as you say, setting the camera into Brownie mode, f16, and shooting lots of film. I remember… Read more »

Dear Bob: Slight-of-hand?? Well yes… pushing TRI-X (from 200 to 1600) by developing with Diafine is another good way to photograph at night! But since most folks are going digital these days I don’t know how these old tricks will ever be carried on! (sigh!) The key to graininess is to print it sharply. So instead of being something you’re trying to hide it begins to define the quality of the photograph. But I still say — “keep it simple”. After awhile more and more things become simple and when you get to be my age….simple is about all I… Read more »

Hi (Uncle) Harold. Your photos bring back for me strong memories of a portion of Brooklyn — Coney Island and the seedy, but vibrant energy of Times Square, that are so vivid from my childhood and teenage years. I haven’t been back in NYC for the past 28 years, but from everything I hear few of those scenes exist anymore. My sister, Muhasibi, my cousin, Bob Salzman, and you are the only people with whom I have contact who shared the adventures of the Feinstein family so many years ago. My mother, Belle, along with Ethel, Murray, and Alvin are… Read more »

Dear Musawwir: Always great to hear from you. The old Brooklyn days become ever more close to me the older I get! (I guess this is what they call going backwards?) In terms of the Feinstein family adventures of long ago, I remember well your father, Sid, who was laughed at by the family for reading comic books. I will always remember him as a most generous man since he would take me to Coney Island and treat me to a royal time! Let me know when you post your black and white photographs. Would love to see them. And… Read more »

Having grown up right near Coney Island..I have many memories of childhood and teen years spent there…rides, boardwalk, beach, arcades, and of course the Brooklynites…Yoir photos bring it all back…not just visual memories but emotional connections to grandparents and friends. Now 67 years old…Im doing my own photographing of Coney Isleand…post Hurricane Sandy.. My question…any suggestions on how to create Coney images that resonate with emotion and personal memory…and not just images of Coney..

With the warmest of feelings,
Gail Cohen

Gail: Good to hear from you. In terms of your question — I would say don’t think too much about it, but just let yourself get caught up in the energy at Coney Island. I have titled some of my shows “A Coney Island of the Heart” because it is definitely the love of the place that kept me clicking. Find your own love of the place and just go back with that attitude. Coney Island has always been a place that “old timers” talk about how it was. But…it still is! No matter how it evolves, it will always… Read more »

Thanks, Harold, for this fascinating look into the use of night light, and for the accompanying links. We have fiestas here in Mexico that go on into the night, including fireworks, and present opportunities to capture that special quality that only night light affords.
Best to you both,
Allan MacG.

Mr. Feinstein,
I am transfixed by the beauty and mystery of the “Gyro” and “Hurricane” photographs – almost like “Close Encounters of the Third Kind” (!) Were these simply long exposures, no double exposures or any other tricks? I can imagine it being really difficult to get the right balance between the bright swirling lights and the darker surroundings and people. Marvellous!
Did you make any others (I’d love to see more), and are any of these featured in any book, new or old?

Morgan: I used a long exposure and a tripod. Yes, there are some others similar. Contact john@Harold Feinstein.com to see them. And yes, the new book as the Gyro, but not the others. http://www.nazraeli.com/bookdetail.php?book_id=100431.

Oh and good heavens – you were only 18 when you made these?!?