The Griffin Museum of Photography’s Focus Awards!! Flashpoint Boston portfolio reviews!! Brunch with the stars!! The truth is… I haven’t had this much fun in a long time! I notified my friends and family that this was going to be my first foray into the world of photography in any official capacity. As someone who has had a long career – of a very different kind – for most of my life, I really fell into the photography universe because of Harold and my dedication to shepherding his archive and legacy. Thus, my title as Director of the Harold Feinstein Photography Trust has felt like a great honor, but also sort of an odd sized pair of shoes that I haven’t learned to walk in yet with much grace. Well..walk on!! I’m getting the hang of this and enjoying myself to boot! (no pun intended!)

The Griffin Museum of Photography is a non-profit all photography museum located just outside of Boston and founded by a photographer and photojournalist, Arthur Griffin. Born in 1903, Arthur Griffin became the exclusive photographer for the newly created Boston Globe Rotogravure Magazine and a pioneer in the use of color film. Opened in 1992, the not-for-profit Griffin Museum, is the embodiment of his passion to promote an appreciation of photographic art and a broader understanding of its visual, emotional, and social impact. It has succeeded in doing just that with the help of the gutsy and glorious Paula Tognarelli and her generous staff and board.

Since 2006, the Griffin has hosted the Focus Awards, an impressive annual program honoring some of the finest contributors to the field — both individuals and institutions. Harold received the Living Legend Award in 2011. This year I was invited to present the Spotlight Award which is given to an organization “that consistently shines a light on photography and has created a far reaching impact in the field.” What a great choice they made this year to honor APAG (American Photography Archives Group), a group founded by the formidable Mary Engel, who was in Boston to accept the award. Mary has been a north star for so many people like me, who have found themselves in the position of inheriting or managing a photography archive and not really knowing where to begin. Believe me, it’s a daunting task! But it’s far less so because of Mary and APAG. Excerpts of my remarks offered to Mary at the awards brunch on October 22nd are below. Thank you Mary!

Others who were honored by the Griffin this year included the legendary Elizabeth Avedon who received the Lifetime Achievement Award for her multiple contributions to photography as a curator, writer, and designer of both books and exhibitions – and as an innovator. Her award was presented by final art photographer Sean Parry. The Beacon Award, which honors an individual who has brought prominence to the local New England photography scene was given to Paul Messier for his breakthrough work in photo conservation. (Who knew he has the largest collection of photographic paper in the world? I pumped him for information and hope to get a bit of his time to help me decipher some of Harold’s vintage prints!) His award was presented by Melissa Barta, Projects Curator at the Weissman Preservation Center at Harvard Library.

And finally, the truly memorable, Beuford Smith, received the distinguished Culture of Legacy award. The Griffin put it aptly when it says: “A culture of legacy takes place when history informs the present and works towards a better future with conscience.” Amen. I felt like I knew Beuford even before meeting him since he had shared with me ahead of time some of his fond memories of Harold’s role in his photographic career. He launched the landmark Black Photography Annual in 1973 in addition to founding the Cesaire Photo Agency. He also served as President (Emeritus) of Kamoinge, Inc., which began in the early 1960’s as a consortium of African American photographers dedicated to expressing the truth of their lives via photography. (See my earlier blog entitled: Harold’s students: Louis Draper, Herbert Randall and the Kamoinge Workshop) Beuford’s award was presented by Bill Gaskins, a professor in the art department at Cornell University.

In addition to the Sunday morning awards festivities, the city of Boston was abuzz with photo activities as Flashpoint Boston, the area’s premier photo festival, was in full swing with exhibitions, talks and portfolio reviews. I once again got my big toe in the water as a portfolio reviewer and was really blown away by some of the great work I saw! My initiation into being a reviewer (“Who me?” “What do I know about photography”) was greatly supported and assisted by a few of the wonderful friends from the photography community I have come to know and admire who were on hand with good advice. They include: Jim Fitts,Neal Rantoul, Elin Spring, Drew Epstein, Bill Franson, Dana Salvo and Steven Duede. Kudos also go to Paula Tognarelli and Elizabeth Avedon for goading me on! Good mentors all!

IN APPRECIATION OF THE AMERICAN PHOTO ARCHIVES GROUP AND FOUNDER MARY ENGEL, RECIPIENT OF THE 2017 SPOTLIGHT AWARD
FROM THE GRIFFIN MUSEUM OF PHOTOGRAPHY, excerpts of remarks presented by Judith Thompson, Director, Harold Feinstein Photography Trust

When an artist dies the fate of their legacy falls to others. In my experience this is where the expression “it is both a blessing and a burden” comes from! I shudder to think of the number of truly great artists whose work remains hidden or even lost forever because there was no one available or willing to organize, archive, preserve and promote it. After all, the chances of having boxes of negatives discovered at a small Chicago auction house resulting in posthumous stardom are very, very small indeed.

In the good fortune that an artist’s family members, spouse, devoted friend or curator takes on the task of preserving a legacy, they soon discover that it is a demanding job requiring a great deal of emotional and psychological fortitude, financial investment and organizational hutzpah! On top of that, it is often emotionally fraught work – particularly for family members. I speak for myself when I say that devotion to my husband’s legacy gives me the great gift of continued closeness to him on a daily basis but also continued feelings of loss generated by that same closeness. That said, there is nothing I would rather be doing. It is most certainly a labor of love.

I can truly NOT imagine how hugely difficult it would be to persevere in this work without the guidance and support of Mary Engel and APAG – The American Photo Archives Group. Through her own determination to honor the gifts her parents left behind, Mary has created the map and compass for the rest of us and this is, in fact, one of her own great legacies to the photography world, in addition to keeping alive her parent’s work.

I first heard about Mary Engel and APAG in 2013 from Barbara Bullock-Wilson, the daughter of the master photographer Wynn Bullock. She and her late husband, Gene, were at our home in Merrimac, Massachusetts, and I was reviewing with her the many complexities of organizing Harold’s estate and legacy for the future. “You need to know about APAG”, she said, and proceeded to tell me about Mary and her journey developing APAG.

My first APAG meeting in New York was about three months later, after having contacted Mary and receiving a warm invitation and the answer to a slew of questions. In retrospect, I am in even more awe of Mary’s dedication and patience when I recall the early conversations I had with her and imagine multiplying them by the large number of people who come to her seeking advice and encouragement.

Since then I have attended as many meetings and annual conferences as I can manage and participated last year at the APAG table during AIPAD. Over the years, I have made connections to a variety of people who have enriched my world – from old students of Harold’s who met him 60 years ago and happen to be APAG members, to key figures in the photo licensing world to museum curators involved in preserving photographic legacies, to appraisers helping to clarify the various appraisal options to legal experts in copyright law to book publishers and more. The APAG website offers a place for all members to continue to access resources, share their news on books, exhibitions and other events. And APAG’s periodic field trips allow members valuable face time with key curators, gallerists, and others. Kudos must also go to the generous wisdom and support we receive from APAG board members Julie Grahame and Grayson Dantzic who contribute their own blend of particular skills from archiving to web designing to curating – let alone moral support!

When I asked Mary recently what she saw as APAG’s biggest accomplishment she said: “Helping to ease people’s worries. I get a lot of pleasure out of really helping.”

This she has done this for me and so many others. When Harold died in June, 2015, Mary was one of the first people to call me from the photography world to find out how I was and how she might be helpful. I responded that I was working on the language for an obituary and she immediately said she would call her own connections at the New York Times. Several months later when I went to the annual APAG conference in New York – a meeting I highly recommend to others for the wealth of resources assembled at these gatherings — I was greeted by the whole APAG team with the kind of sensitivity and care that one really needs after such a huge loss. Plus, there was a panel discussion about the emotional aspects of inheritance, which was a pretty salient topic for me in that moment and not one which I would expect to find in many places.

In sum, Mary has been able to help so many people because she knows what it’s like to be given the responsibility for a legacy, and she cares about easing the burdens of it so that people can appreciate the blessings of it. She has built an organization based on her experience and has invited others to contribute with their own discoveries, making APAG an evolving community of insight, knowledge and resources. And it must be said, she has done this without the full financial support she needs and deserves. Hopefully this is changing. I commend the Griffin Museum for giving this 2017 Spotlight Award to Mary Engel and APAG. I cannot think of a more deserving recipient to whom I am personally deeply grateful. 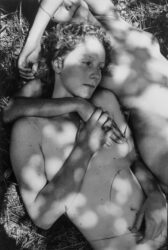 The Cook, the photographer and the poison ivy: Story of a photo shoot