As a boy growing up in Brooklyn, my first exposure to Times Square was during the day. While Coney Island was my first location of choice, I loved playing hooky from school and heading uptown to Times Square to catch the first run movies complete with live stage show and organ music at intermission and plenty of candy. The Roxy, The Paramont, The Strand — these were the places I could get lost in for a few hours of big screen splendor. The next day I would share stories with my classmates of all the wonders I had seen — movies like Thirty Seconds over Tokyo, National Velvet or A Tree Grows in Brooklyn — innocent fare that you wouldn’t find in Times Square today! My friends were more than a little envious; not only for the adventure I’d had at the movies all by myself, but also the good luck of playing hooky and not getting caught. And then there was Radio City Music Hall. I remember being taken there by the mother of a girlfriend. It was like being in the Wizard of Oz for me.

As I grew older and picked up a camera, I headed uptown because that’s where the lights were — a great place to be dazzled by big city life — a kind of uptown Coney Island — with all types of people, innocent and edgy, normal and bizarre, and more lights than anyplace in the world — at least back then! And instead of being in the movie theaters I found life on the street to be the movie, with all the neon lights one big marquee. Sometimes the lights were the main character and sometimes the people — drawn there by the Broadway shows, the seedy magazine shops, the window shopping, or the lights themselves. I almost always left my camera lens wide open so that the brilliance of the lights was exaggerated.

Then there was Grant’s cafeteria – corner of 42nd and 7th — a large hot dog and beer joint open to the sidewalk where a 10 ounce glass of beer was 35¢ and a hot dog 15¢. It wasn’t Nathan’s, but I didn’t hold that against it!

Times Square changed a lot from when I was a boy, but the lights are still the lights and photographing them at night will always be an attraction. Now with the evenings getting warmer you’ll have to decide whether to go down to Coney Island or up to Times Square. Either way you can’t go wrong. 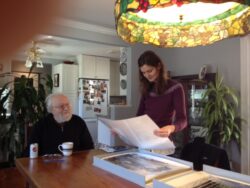