Available light: Many shades of white

About this photograph
available light / black and white

It’s mid-winter now and I figure it’s best to consider the season through the eyes of appreciation or risk succumbing to the winter blues (or acting on impulse and flying off to the tropics, which seems like a great, but impossible, alternative!) Looking outside my window, I see a carpet of white and realize that few things so radically alter a landscape as quickly as snow. As photographers, particularly if we’re working in black and white, we’re seeing tonalities, variances in light and dark. Within a few short hours the dark tones of gray and black on winter ground can become a huge bright swath of white. It is visually transformative and brings another form of available light into a photograph.

Not all white is alike, and appreciating the various shades of white — from brightest sunlit speck to shaded grays — is what makes a photograph really sing. Since snow makes a big and brightening statement in a photograph, it offers the opportunity for both great contrast and complex subtleties that can be accentuated in the print making process. In addition to considerations of highlights and tonalities snow brings its own mood to a photograph. Whether boldly or subtlety, snow — like rain or bright sun or dark clouds — helps to define the story inside the photograph.

In Night snow on West 11th Street, the snow on the dark city street brings an element of “coziness” to the photograph. It becomes a “scene” defined by snow, which seems to embrace the lone figure. There is a romance about it. The whitest white comes form the street lights, which work together with the gentler white of the snow to orchestrate a mood of paradoxical warmth.

In Steeplechase pier in winter, the sky and snow together provide a kind of gray monotony against which the figures coming and going are silhouetted like notes in the music of that pier. The mood here is cold and contemplative, in great contrast to the Coney Island of summertime! Now, that’s transformation! These people seem to be walking in and out of infinity bundled up against the elements and encompassed in gray.

In Shoe store window, the snowy backdrop provides just the right level of brightness and continuity to allow both the shoes and people to take center stage and stand out more than they would have against multi-layered grays and blacks of asphalt and cement.

This photo is an example of the snow really creating the visual excitement of the photograph, accentuating each branch to create a complexity of tones and shapes dependent on the snow’s defining influence.

Finally, as in the lead photo above, this one shows the softness and subtly of snow — almost flowing like clouds — some brighter than others… whites and dark and many shades in between. The mood is peaceful, quiet and still, and that’s perhaps the best part of winter. With a few more months yet to come, it’s best to love the one you’re with!

Here’s a great Weegee photo published last week in Fans in a Flashbulb! The mood is amusement! 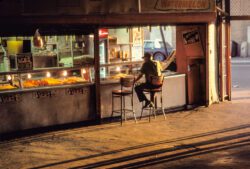 Beautiful Harold!
With love from a wintry Stockholm,
Peter Norrman

….and I guess you know all about snow! Sending greetings to you Peter. Nice to hear from you! Stay warm!

Mr. Feinstein, This post about winter just made my morning. Your message of loving the one you’re with is most appropriate for the season. We get snow here very infrequently but when we do it is a major event. Our winters here in Mississippi are for the most part dull gray punctuated by sunny days when the temperature soars back into the realm of Spring. I’m forcing myself to get out this winter and really search for photo opportunities (new camera to test) and I’m enjoying the process. I look at your wonderful book often and take great inspiration from… Read more »

Thanks Randall. There are so many “major events” up north here! Happy you enjoyed the post — and my book! Keep clicking!

Dear Harold, just want to tell you that I follow your blog with the same pleasure (well not quite) as your remarks in our Bond Street workshop in the 70s. It was great that my daughter Hannah actually met you at the book presentation, I was in Cairo at that time. You are still an inspiration and share a lot of responsibility that I still love photography (now mostly images of Egypt, some with sand in lieu of snow). Fondly, Walther

So great to be hearing from you Walther. My memory’s not so good anymore, so I’m assuming your daughter came to the event at Apeture? Tell her to be in touch again sometime as I’d love to get to know her better. The Bond Street workshop does how fond memories for me though! Some things are unforgettable. What are you doing in Egypt? I was thinking as I was writing this blog that sand and snow — same thing!…..as far as photographing goes! So enjoy the sand and remember: Keep the needle in the meedle!

Thanks for your response Harold; you obviously lead a wonderfully productive life, still inspiring us with your work and managing to keep up correspondence as well. Second image on the right side on your bio page, I am the bearded guy in the left corner of the picture of your Bond Street disciples, at the time living in the loft two floors above you (once again, one of the best learning experiences in my life). I always stayed in education, am now 70 and still love working, so I am the director of an American international school in Cairo. Love… Read more »

Writing to you from the Philippines, Harold and Judith. We left winter in NH, not a flight but a transition. I’m grateful we were able to enjoy snow, ice and cold before coming to our second home where we will not see snow for these three months! Lovely photos and eloquent words. Thanks.

Thanks David. You’ve got the best of both worlds! Glad to know you’re enjoying it all! Best to you — Harold (and Judith!)

Thanks for the comments Al. Sounds like you’re in the flow. Just remember, the equipment makes a difference, but its the “seeing” that matters most! Send along some of your work for me to take a look at some time. Best to you

Hi Harold, I love your black and white snow photos. The ones posted, except Snow dunes drifts, capture for me urban snow, roots of my own love of the stuff. Snow dunes drift reminds me of the lead photo in your last post, the nude behind the foggy shower door. Beautiful and evocative, as are your all your works. I find your photos to be anti-depressive, calling all to enter the world and share the joy. You may have have launched your own version of: We Shall Overcome. Here is a poem I recently revised in response to your snow… Read more »

Dear Robert: Even though I’m sitting in arthritic pain right now, your words are beautiful to me and help ease the pain! How could we have been kept apart for so many years? Being back again with you and Kaethe is as true a sense of family as I’ve ever enjoyed. Much love to both of you, Uncle Harold.

I love this blog! Poetry in picture and word! You are a shaman!

Hugs to you and Judith,
Allan (& Barbara)

Allan: So wonderful to hear from you. Wish you were closer….we’d share some of the snow with you! P.S. Send us a recent photo of the two of you so that we can be jealous of you in sunny Mexico!