The Broken Christ: On compassion and the nature of this earthly life

And Jesus was a sailor
When he walked upon the water
And he spent a long time watching
From his lonely wooden tower
And when he knew for certain
Only drowning men could see him
He said “All men will be sailors then
Until the sea shall free them”
But he himself was broken
Long before the sky would open
Forsaken, almost human
He sank beneath your wisdom like a stone
Leonard Cohen, (1934-2016), excerpted from the song Suzanne

When the documentary film maker, Andy Dunn, returned from his trip interviewing Harold’s friends, family and former students this summer, he wrote to me with something that had surprised him about his journey.

“When filming interviews with some of Harold’s closest family and friends for the forthcoming documentary I was struck by how many of them singled out the “Broken Christ” as their most memorable photograph of Harold’s. They found it reflected the innocence, spirituality, humility and honesty of Harold’s work in one image. I was surprised because it’s always his more joyful or playful images that are chosen for the cover of books or to accompany articles.”

In his own words, Harold said of this photograph:

“Looking at The Broken Christ, you know, the motif is continually repeated throughout time –the messenger, the protector, the children, and the child himself. Everything is woven in texturally — the oldness of the storefront and the childrens’ bodies, the dirt and the grime and the Christ figure broken and taped. Bsically you know… we’re all born of this earth..we’re all born of this earth.”

Anyone who knew Harold would agree that the expression “down-to-earth” fit him to a tee. He was an acutely sensual human being and lived in center of his senses – whether it was tasting something magnificent, smelling a rose, feeling the fur of our cat, listening to Vivaldi or Billie Holiday, and of course, seeing — anything and everything that unfolded around him in everyday life. And it was the thrill of being present to all of what our senses offer us that evoked from him so often the Yiddish expression L’Chaim. To life! So it is no surprise that the 19 year old Harold, who came across this scene (above) while walking through his neighborhood in Coney Island, saw both the poverty and the broken protector, not with cynicism, but rather with appreciation. Brokenness is a part of being born of this earth. And it’s universal. I chose to put The Broken Christ image on my holiday cards this year. I know many people who are feeling broken by the events of the world and wondering where to find hope. Inspired by the image of the Broken Christ standing over the children from the streets, I am reminded of this quote from Terry Tempest Williams: “Finding beauty in a broken world is creating beauty in the world we find.” Giving birth to this photograph, was, for Harold, less a conscious choosing to create something beautiful from the elements of brokenness, and more a gifted way of seeing the world — an automatic responsive relationship to life grounded in appreciation. But for me, being in the brokenness of life — my own or others’ — has required a more deliberate choice to open to the vulnerability common to all life and celebrate Hemingway’s observation that some choose to become strong in the broken places. That is the path of the wounded healer. It has been one of the greatest gifts of my life to learn from so many courageous people who have chosen the path of the wounded healer. My dear friend and muse, Arn Chorn-Pond, who unwittingly started me on this journey in 1980 when he was 16 and I was 29, referred frequently to “the common bond of suffering” we all share – recognizing that touching the suffering of others’ with an open heart allows compassion to flow. And compassion is infinitely wiser and stronger than fear and blame precisely because it is grounded in the fundamental truth of our interconnectedness. “We are all born of this earth.”

We all suffer, whether privately in our homes (for those of us who have homes), or in hospitals, or on the stage of the world, which was the case for Arn. When he was nine the Khmer Rouge took over Cambodia and committed genocide on it’s people. Forced to carry a gun, to bury his tears at witnessing the mass slaughter of children in the killing center where he was held, Arn only survived because his gift as a musician brought him to the attention of some Khmer Rouge officers who forced him to play their “revolutionary” songs at an officer’s headquarters, thus sparing him the worse fate of so many other children.

We met in 1980, a day after he arrived as the first unaccompanied minor to be allowed into the U.S. from Cambodia and he became my inspiration for co-founding the organization Children of War in 1984. He has gone on to win many human rights awards and launch the highly successful organization Cambodian Living Arts, using his own wounds as a catalyst for reviving and celebrating the art and culture of Cambodian. This quote from Arn, said before an audience of 10,000 at the Cathedral of St. John the Divine in New York when he was 17, became the template for our work together.

“It seems almost unbelievable that I could forgive what happened to my people. But more and more I realize I’m alive. I’m not just alive again because bullets failed to reach my brain, or because I wasn’t butchered in the awful Cambodian genocide. I’m alive, really only painfully after all these years, because I can love again. I can feel the suffering of others, not just my own, who are enduring the violence of human madness.”

In the following decade, I was blessed to know and support hundreds of others who, like Arn, had been victims of violence at a young age. They found that by sharing their stories together and learning to open to the pain, they found the profound joy of connection grounded in compassion. They then toured the country to meet with U.S. teenagers who were eager to engage their own hearts in making the world a better place. It is not lost on me that at this moment, the opportunity to build this kind of global community of compassion found right here in our own diverse “back yard” is threatened by fear and xenophobia and the potential of exiling those who can teach us so much. Here is how Rabia, from Lebanon, described this feeling to an interviewer in 1986. So, as 2016 comes to an end and I face the brokenness of the world, I am inspired by our capacity to become strong in the broken places by opening to compassion. I have found this to be the most important lesson in my life and am aware of it’s supreme importance in this particular moment in time. Here are a few more photographs of my role models with deep appreciation for all they have given to me and the world. WISHING YOU ALL THE GIFT OF CONNECTION AND COMPASSION IN 2017! 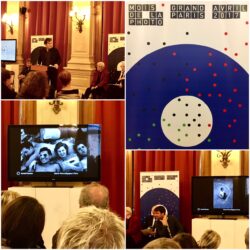