About this photograph / Current events

I’ve only once before re-published a post, but feel compelled to do so today.This post on Dignity and the Human Spirit was originally published in November 2015. It shares Harold’s thoughts on the photo above in addition to introducing readers to the wonderful work of photographer Dana Gluckstein and her book Dignity, which compiles her remarkable portraits of indigenous peoples worldwide.

In the past week, I have been appreciating more than ever President Barack Obama and the dignity and integrity he brought to the Office he is now departing. As Inauguration Day 2017 approaches, and there seems to be a dearth of dignity in the air, I lift up the words of Martin Luther King, Jr. as a way to remember both his profound soul force and the truth of our indomitable human spirit.

“The arc of the moral universe is long, but it bends toward justice.”

HERE’S THE MODIFIED BLOG FROM NOVEMBER 2015

In 1989, When Harold was talking to students at Penn State University walking through the Zoller Gallery where a retrospective of his work was hanging, he said of the photograph above:

The dignity of faces. Two beautiful souls…Look at that wonderful hand he has. And look at her face. It’s like old Renaissance babies that you see in old paintings…small details, the fineness of it. Beautiful people…beautiful people! You see, you have to see people through the eyes of someone who loves them; from their lover, their wife, their child. You have to see them as if you were that close…and see the sweetness. And we forget that. We have attitudes…to age groups…to racial groups…whatever it is. And then we’re no longer responding to that soul.

You can listen to Harold’s commentary here.

I will share more photo commentary by Harold occasionally in this blog, but one reason for choosing this one at this time is that it coincides with a recent email I received from my friend Dana Gluckstein, a marvelous photographer whose amazing journey photographing indigenous peoples’ from all over the world is a palpable example of responding to the soul of the person. Her book released several years ago in conjunction with Amnesty International, Dignity: In honor of the rights of indigenous people (powerHouse books, 2010) celebrates Amnesty’s 50th anniversary and was partially responsible for tipping the balance in getting the U.S. to finally sign the Universal Declaration of the Rights of Indigenous People.

I came to know Dana in the mid 80’s when I was running a non-profit dedicated to developing creative partnerships for social change between young people from warzones and those from the U.S. Dana became an advocate and organizer of that work in Los Angeles. Upon entering her lovely home, I was stunned by the profound presence of a 36″ x 36″ photograph of two tribal women from Kenya. It was dignity personified and clearly reflected the bond between photographer and subjects. Dana says:

“What I try to do with the camera is to stop time; to create an authentic moment — an exchange between human beings that says ‘We are all one. We really are the same. Photographing is like meditation. It’s all in the breath. In being present'”

Harold used to say “Seeing is an act of prayer, of absolute appreciation of the gift in front of our eyes.”

I introduced Harold to Dana’s photography many decades ago and he became a huge admirer of her work and appreciated the kinship they shared in their way of seeing. I’m grateful to them both for consistently seeing through the eyes of love.

Dana’s remarkable body of work has been showcased at the United Nations in Geneva and has toured through Europe. It is now on tour throughout the United States. Be sure to get the book. If you can see the show, all the better. Links are below. 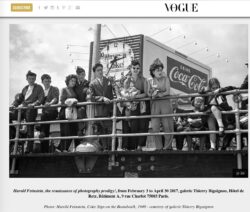 Vogue Magazine lists Feinstein Paris show as one of 16 “must-see” exhibitions in 2017!