This year has been an eventful year on every level. Early in 2014 Harold suffered some health setbacks that resulted in a short period of hospice care. But, with the help of friends, family and Harold’s strong will he remains vital, happy and creative. And, while the beginning of the year was bumpy, we can only celebrate the many wonderful opportunities that have come in the second half of the year.

Here’s a few sentence wrap-up with details below. Two shows in the fall; one in Moscow and one in Atlanta. Two documentaries-in-progress; one from filmmaker Andy Dunn who also works with the BBC, and the other from Art of Photography host Ted Forbes for his large internet audience. And a number of wonderful articles in the press from Eye of Photography, The Guardian UK and Huck Magazine. Currently on view at Lumiere in Atlanta, the exhibition View from the Street pairs up Harold’s work with that of Vivian Maier, the nanny photographer whose unknown negatives purchased at auction in Chicago catapulted her to posthumous stardom.

According to this Arts Atlanta review:

It’s an ingenious coupling: the juxtaposition brings out their similarities and their differences. Most obviously, they are both street photographers in the black-and-white tradition… Both were interested in capturing genuine expression and life as it unfolded… For all of their similarities, however, their very different personalities play out in their art, particularly in their self-portraits. Maier was a loner, a secretive “amateur.” She evinced no intention to share her work with the rest of the world. They became “increasingly cryptic over the course of her life,” remarks Heiferman. When her face was not hidden behind her Rolleiflex, she looked straight into the camera, inquisitive but impassive. Feinstein possesses a vibrant personality. He is beloved as a photographer, teacher and mentor. His approach to self-portraits is more playful, a way to affirm his presence and add complexity. This pairing of the artists’ street photography makes for an intellectually stimulating dialogue between them — and the viewer.

Prior to the Atlanta show, Lumiere Brothers Center for Photography in Moscow mounted an impressive Feinstein retrospective featuring over 100 photographs, an eight foot tall mural and a wall devoted to Harold’s montage work. It was partially sponsored by Harper’s Bazaar and had wonderful attendance. A Russian tour next year is currently being explored. A slide show from the exhibition is below.

Last summer we had a visit from Andy Dunn, a freelance documentary filmmaker who has worked closely with the BBC and produced other films about musicians and artists. He is planning to do a full length documentary about Harold and began by taking him to Coney Island this summer. He produced this short teaser video for Huck Magazine’s annual documentary photography issue (Fall 2014). Stay tuned for more information on the full length documentary.

In early December, we had a visit from Art of Photography host, Ted Forbes, together with his wife, Nicole. Ted has produced over 350 episodes that air on his You Tube Channel three times per week. He has over 77,000 subscribers around the world, and covers topics from the history of photography, in-depth conversations about famous and emerging photographers, as well as technique, cameras and composition.

He wants to start a new format of mini documentaries that will dive more deeply into the lives, philosophies and photography of a number of master photographers — beginning with Harold. He put out this teaser program on December 15th and has another one in the works. We thank our dear friend, Max Schenk, who studied with Harold and has been printing some of his work for contacting Ted and making the great connection. We’re looking forward to seeing what he produces and keeping you posted!

From The Guardian, Harold Feinstein’s Best Photograph: Coney Island in 1949. An in-depth look at the photograph, Coney Island teenagers. See the full story.

Wishing you all a wonderful and fulfilling New Year.

With gratitude to all our friends and supporters. 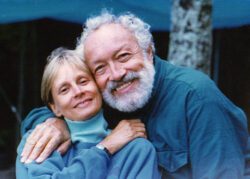 Ode to my wife on Thanksgiving

Wishing You and Judith the Best in 2015.
We are your biggest fans,
Connie and Jerry

What a year, Harold! We couldn’t be happier for you and Judith!
Wishing you a joyous Hannukah & Christmas Season, and a
Happy AND HEALTHY 2015!
Hugs,
Allan & Barbara