Going for Gold. Awards Come in for Music of the People Campaign.

In October this year, the studio received an email from Merve Selamet, senior copywriter with Havas Worldwide Turkey (the Turkish affiliate of Havas Worldwide, one of the largest integrated marketing communications agencies in the world). Their client, independent Turkish radio station, Acik Radyo, was beginning a campaign called Music of the People and had found Harold’s photograph, Boardwalk Sheet Music Montage (1952) to be the perfect image to brand their public radio campaign. Harold fell in love with the spirit and mission of Acik Radyo, agreed to the use of his photograph, and wrote a post about the partnership.

Acik Radyo is one of the rare institutions in Turkey that is “completely independent from the state, and from any kind of ‘ideology’ except the principles of pluralist democracy, the rule of law, and the protection and promotion of universal human rights and fundamental freedoms. Open radio is open to all the sounds, colors and vibrations of the universe.”

Shortly after the blog posted, it appeared on a number of communications and marketing sites including this one from The Technique Print Group.

“This is a great story of how a picture from the 1950s came to be the modern public face of the radio station. Looking at the picture, it seems hard to imagine that it could be used for anything else- it just shouts music.”

The originality of the photograph and it’s perfect pairing with Acik Radyo’s campaign was celebrated by a number of major communications and marketing awards.

The prestigious EPICA Awards for excellence in marketing and advertising were begun in 1987 and focused primarily on Europe, The Middle East and Africa until 2012 when they went global. EPICA’s aim is to reward outstanding creativity and help communication agencies, film production companies, media consultancies, photographers and design studios to develop their reputations beyond their national borders.

The awards are judged by senior editors and journalist from 41 Advertising Trade Magazines in 34 countries. With gold, silver and bronze medals in different categories, four Grand Prix winners are selected each year from among the entire group of winners. The Music for the People campaign was one of the four Grand Prix winners this year (as well as the Gold Medalist in the Communications Services category). Other winners came from Denmark, Tunisia and Namibia.

The Grand Prix from Havas Worldwide Turkey is an elegant, nostalgic image depicting silhouettes of strolling pedestrians against a backdrop of iron railings, as if they are musical notes. It is a photomontage of pictures taken in 1952 by Harold Feinstein, who agreed to lend his work to the campaign after being contacted by the radio station.

Jury president François Kermoal noted: “In an increasingly complex advertising world, this graphic image is in the grand tradition of posters. It’s a pleasure to look at and genuinely provokes the desire to find out more about the radio station.”

The Cristal Festival gathers over 1100 delegates from 150 ad agencies every year throughout Europe. The coveted Cristal awards are presented in a variety of categories. The Music of the People Campaign won three awards, including the top prize for Art Direction in Print Craft (the Cristal Award).

Finally, Lüerzer’s Archive magazine listed the campaign as one of the 10 best print ads of 2013, and the voting for their awards still continues. If you want to vote or announce it, tweet “Music of the people” @LuerzersArchive #ArchivePrint2013. We’ll be grateful.

Simultaneously, we’ve been receiving inquiries about how to purchase a print of this image. Made from six different negatives, this very difficult print will be made available in limited editions.

We extend our thanks to friends at Acik Radyo and Havas Worldwide for seeing the beautiful synergy between image and message. We’re so glad to be a central part of Music of the People. 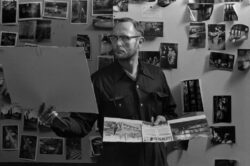 Gene Smith, James Karales and me: Remembering the Pittsburgh Project

Could there be anyone else who could have made this image? No. A classic Harold Moment, or HM for short, illuminated by its simplicity, and the naked truth of Love. This image is perfection incarnate because it is Love, and there is nothing more perfect than that. No high-tech gear, no assistants, no set-up or staging or lights manufactured by companies you can’t even pronounce, just you, some film, and a metal box with a hole in the front, some glass, and a few working parts. And, the Harold Moment, that “being present” thing that you do that is your… Read more »