On Friday April 17th, Harold celebrated his 84th birthday! He received this surprise video birthday card from Ted Forbes of The Art of Photography whose podcasts are seen by thousands of his subscribers worldwide. `

We look forward to the documentary and thank Ted for helping Harold celebrate his 84th birthday!

PLEASE NOTE: The photo appearing at 2:51 in the film (couple embracing) is not Harold’s. Ted’s apologies! 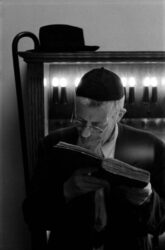 Passover, Easter and the promise of new life!

We watched the video in Tel Aviv and loved remembering your teaching and incredible loving generosity. Mazal tov on your birthday. With much love
Dorien and Rachel

Dear Dorien and Rachel: It warms my heart so much to hear from both of you. Your impact on my life has been so memorable. I hope we see each other again! Harold

If memory serves, you were discharged to hospice a little over a year ago. This must be the most productive year anyone on hospice has ever had. The outpouring from you, about you and toward you is truly amazing. Thank you of your work and your heart.

Dear Kaethe: Yes, it’s not over till it’s over! And, one thing that has kept it all moving harmoniously this past year is the kindness and appreciation of people like yourself. I send you back thoughts and wishes for well-being on all levels of your life. Fondly, Harold

The video was such a wonderful tribute to a great man and an incredible photographer. Please add Scotland to your list of countries….Many Happy Returns, Harold.
Slainte
Anne

Ah Harold, your beaming, happy full face is also a work of art, reflecting all the love received and given. Wishing you many happy and continuous re-birthdays !
Onward, with love,
Beverly