Harold Feinstein: A Retrospective extended to the end of the year

Due to the great response to Harold Feinstein: A Retrospective hanging at the Panopticon Gallery in Boston it has been extended through the end of the year.

What began on September 14th as a packed house opening has continued to generate great buzz prompting gallery owner Jason Landry to keep the show up throughout the Thanksgiving and Christmas period. A book signing is planned for Saturday,November 3rd at noon at the gallery, which will finally have its full shipment of books.

We’re grateful again to all those from the Kickstarter campaign and beyond who have been patient about their books. Due to some printing delays and the proverbial “slow boat from China”, the long-awaited book published by Nazareli Press will finally be arriving in the country on about October 20th. However, 50 did arrive at the gallery in time for the show, where Harold was finally able to see it for the first time. He is overjoyed.

In addition to numbers of independent bloggers capturing the show, we were pleased to see this from PDN photo of the day, and also two-page spread in New England’s Artscope magazine.

Just a few days before the show we received our hard copy of The Independent on Sunday, which we reported on earlier. What we hadn’t known is how beautiful the cover is and how much interest the article would generate from people seeing it in the UK. We’re grateful again to Peter Popham and to those purchasing prints because of this great spread. 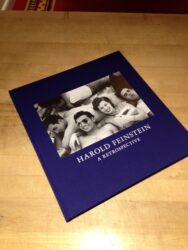 This is fabulous! So many more people will get a chance to see this wonderful work, “up close and personal”…which is the way Harold shoots so much of his work. I am so pleased to see that Harold’s work is finally getting the exposure it deserves and this great man has more reasons to smile! 🙂

The stuff on the Harold Feinstein website has totally knocked my socks off. I guess he didn’t engender enough guilt for the social/political conscious of the Photo League. Apparently, he didn’t have to; the work is just terrific!

Any chance the show will travel to NYC?