Sunday, September 15th at 3PM at the Coney Island Museum!

Last Stop Coney Island: The Life and Photography of Harold Feinstein  had it’s premiere in 2018 at DOCNYC and premiered in  London in 2019.  Along the way it played  in Toronto and will soon be in Australia and then Atlanta.  But none of these venues is as special as CONEY ISLAND!  At long last Harold’s spirit is returning home to Coney Island where he was born — the place that speaks best to his persona and his spirit — one-of-a-kind, charismatic, non-conforming, thirst for life, in-the-moment,  open-to-everything!

The film begins with an ode to Coney Island, its place in the American psyche and in the development of Harold’s vision.  It ends with his last trip there, with filmmaker Andy Dunn in 2014, less than a year before he died.  We are thrilled to see the film screened at the place Harold called home, or as he was known to say,  “the center of the universe.”  (See the trailer to the film here).

Coney Island is, was, and always will be my treasure island.  I feel like I dropped out of my mother’s womb to the sound of the kids screaming on the Cyclone.  And, of course, when I started photographing, that’s the first place I went to!  The thing about Coney Island is — it’s not how to get a picture, it’s how can you avoid it.  I mean there was something happening everywhere.  All realms of people would go there.”

Joining me will be some of Harold’s friends, fans, and students and many of the “usual suspects” who frequent the Coney Island Boardwalk.

Here’s what a few reviewers have said about the film:

“Last Stop would be a welcome tribute at any time, but it’s especially bracing when today’s constant deluge of visual images can’t help but dilute the impact of photography. Dunn’s film is fully attuned to the vibrancy and tenderness and sense of possibility in Feinstein’s photos, to the life in them.”   Hollywood Reporter

“Photographer Harold Feinstein was celebrated as one of the greatest of his generation when he died in 2015, but wasn’t a household name.  This absorbing documentary acts as a timely reminder of his singular vision, which took on subjects including carefree teenagers on Coney Island in the 1950s and draftees in the Korean war, infusing them with rare spontaneity and intimacy. ”   The Telegraph of London

“His brilliance only fully appreciated in his final years, Harold Feinstein was a photographer of empathy and with a sharp eye for urban drama in the apparently mundane. Growing up near Coney Island,  Feinstein had the perfect testing grounds for his talents…Andy Dunn’s excellent documentary features interviews with Feinstein, many shortly before his death in 2015.”    The Times of London 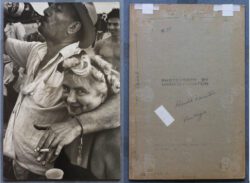