I’m  pleased that the Newburyport Documentary Film Festival has selected Last Stop Coney Island: The Life and Photography of Harold Feinstein  as one of it’s featured films in 2019.  For the last fifteen years of his life,  Harold and I lived in the town of Merrimac, MA which is right next door to the beautiful city of Newburyport.  So it’s fitting that the second showing of the film,  after it’s sold-out premiere in New York  City — Harold’s first hometown! — should be here in his last hometown!

For those who are local, or close by,  GET YOUR TICKETS NOW as they are selling fast!  For a sneak peek, watch the trailer here!  Prior to the screening there will be a reception at the Firehouse with free beer and snacks! (Who does that anymore?)

Joining me for a conversation after the film is world renowned photo critic A.D. Coleman who also appears prominently in the film.  Here’s a bit more about him.

A.D. Coleman is an internationally known critic of photography and photo-based art. His work has been translated into 22 languages and published in 32 countries. Coleman’s widely read blog “Photocritic International” appears at photocritic.com. In 2010 he received the J.Dudley Johnston Award from the Royal Photographic Society (U.K.) for  “sustained excellence in writing about photography.” In 2014 he received the Society for Photographic Education’s Insight Award for lifetime contribution to the field, and in 2015 the Society of Professional Journalists SDX Award for Research About Journalism. Coleman was the first photo critic for The New York Times, authoring 120 articles during his tenure and has also written for The Village Voice and the New York Observer.

I’m also pleased that our local hero, Max Schenk, a personal friend and brilliant photographer, who also printed for Harold during his last few years, appears in the film and will be with us at the event. 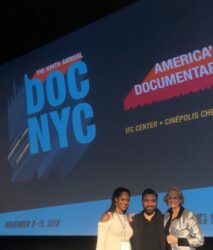