About this photograph
black and white / W. Eugene Smith

My recent opening at Panopticon Gallery was marvelous for so many reasons. First, there was the long-awaited moment of holding my new book in my own hands and getting high on the gorgeousness of the tactile product. (Once again, kudos to Chris Pichler at Nazraeli Press for his stellar job in publishing the book and to Jim Fitts and Jason Landry for packaging it). Then there were the many hundreds of fans, admirers and curiousity-seekers who came out for the opening and made it such a festive affair. One of the great treats for me was the attendance of Linda Benedict-Jones, photography curator of the Carnegie Museum of Art. Because she is someone whose quote appears in my book, I was thrilled to see her at the show and have a chance to thank her personally for her support.

Shortly after the opening she emailed me because she’s giving a talk soon at the W. Eugene Smith Memorial Fund’s annual award ceremony in New York. She wanted to hear a bit more about my own association with Smith and how we influenced each other. I was most influenced by who he was as a man – generous, crazy, meticulous and passionately driven by his vision, and I intend to write more about our relationship in coming posts. He was definitely one of the people I have admired most in my life.

I sent Linda this portrait of Gene, which I took in 1955 at his home in Croton-on-Hudson where he lived with his wife and children. During the time we worked together, we often spent all night in the darkroom printing and sipping Scotch. We were were both heavily into using potassium ferricyanide as an interpretive tool in the printing process. While it is rarely used these days, in the mid 50’s there were a group of photographers experimenting with it as a way to highlight areas of a photograph to produce dramatic results. So looking at this photograph not only brings back fond memories of a man I loved, but also reminiscences of the making of the photograph itself. There’s an enormous amount of detailed lighting attained through the use of potassium ferricyanide in the making of this print – so much so that I doubt if I could do it again, (though now that I’m back in the darkroom periodically I may attempt it!) I love this photograph because it expresses the heroic vision I had of Gene — and still do. As a young man of 24, my time working with him represented a very romantic chapter of my early life.

Back in 2001, before Linda came to be the curator of photography, the Carnegie Museum flew me out to Pittsburgh to speak about Smith during their show Dream Street: W. Eugene Smith’s Pittsburgh Photographs. Another old friend, James Karales, who printed for Smith for quite a few years, was also at this event. I was glad to hear recently that his wonderful work is finally being published in book form — a long overdue event. Here’s one of Gene’s famous photographs printed by James. I remember him telling me at the time how difficult this was to print, particularly around the rim of the glasses where the deft use of potassium ferricyanide was applied. 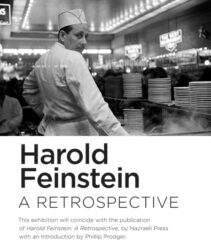 Harold Feinstein: A Retrospective extended to the end of the year

I remember you brining him to class…am I right about this? to your loft? great classes.

I lived next to him on Sixth av….he had painted all his windows black and he did a shot for a Life Magazine story though a broken pane, of the Empire State bldg.

That’s right Charles.I did bring him to one of my classes. The Sixth Avenue location was the Jazz Loft that he took over from me in 1957. Here’s a post I did a while back on that. https://haroldfeinstein.com/jazz-for-the-soul-blue-note-records-the-jazz-loft-and-eric-in-the-evening/. Yes, he did paint all the windows black at the loft and then did a whole photo-essay of the photographs he took through the unpainted spot. So the next time I moved, which was to 747 Sixth Avenue, I suspected he might also move in there, so on the window I wrote “copyright Harold Feinstein”!

Warmest regards to you Charles — Harold

Harold Feinstein Photographer - Coney Island and Hurricane Sandy: Down but never out!

[…] The Coney Island History Project needs your help too! See photos and look at the appeal here. […]