The road into the unknown: A post-election Veteran’s Day reflection

Ever since receiving Erik’s email about his reflections on this photograph, I knew I would post it on Veteran’s Day. However, I had not anticipated the post-election context within which we would find ourselves on this day. I firmly believed we would be transitioning toward the first woman President who, while not perfect or uncomplicated, inspired confidence in me that the values of inclusivity, compassion and global cooperation for the survival of the planet would still be guiding our way. As I re-read Erik’s words now, they speak to me just as powerfully, but with a new allegory. The “road leading into the unknown” is apt for the uncertainty millions of us feel as we face this surreal, new territory called “our future”. On the brink of Civil War, Lincoln invoked “the better angels of our nature” to prevail. I commit myself to that goal, whatever it takes.

Recently the studio received the email below from a veteran who had viewed it at the Fitchburg Art Museum. I was sorry Harold was not here to read since it would’ve touched him as deeply as it did us. In fact, we were so inspired by Erik’s relationship to this image that we decided to add the image to our newly formed catalogue of poster images. We first introduced commemorative posters last year as part of the one year anniversary of Harold’s passing. We will slowly add new images to the catalogue and this seemed like the perfect time and reason to add another.

“I recently saw a print of The Lone Soldier on display in the Fitchburg Art Museum. I fought in the Afghan war over ten years ago, and since then have spent considerable time trying rationalize much of what went on during that year of my life.

When I saw this image, I was immediately overwhelmed with the power of it’s statement. The subject’s statuesque resolve and determination against no present enemy is representative of one of the many emotions I have often felt in my reflections. While most modern representations of war focus on the chaos of combat, the stolid nature of this image – the figure in a dull fog, the sign with unknown message, the tree with haphazardly cut limbs, and of course, the road leading into the unknown – is a true reflection of what it means to experience war on an individual level.

As I researched the image, I was pleased to find that since it was taken decades ago, it has garnered much recognition. I was dismayed however to find that Harold had passed last year, as I had hoped to write and thank him for capturing an image that has brought me a tremendous amount of clarity…Feel free to pass along my gratitude and appreciation for this work to anyone that might find it meaningful.” – Erik

You can purchase a poster of this image and others here. 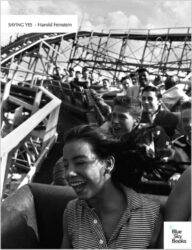 Updates from The Harold Feinstein studio: Several shows, a book, the film, a new studio, a new home!