Labor Day comes and goes… and suddenly we’re told it’s all over! No more sunshine and warm days? No more hot dogs and cotton candy? No more Cyclone? Says who? The beaches in New York City are now “officially closed”, the lifeguards have gone home, and parents are buying school supplies for their kids. No more children screaming on the Cyclone come Monday.

But, as I remember from my own days as a student at PS 204 (and later PS 186), young people will flock back to Coney Island week-ends (or dare I say, after school?) Or, as a true Coney Island addict was reported to say yesterday to a NY 1 reporter :

“Labor Day is for the tourists, you know, real Brooklynites come to Coney Island all year long”

Fourteen million people thronged to Coney Island during this “first-summer-after-Sandy” — more than any other beach in the region. And while some shopkeepers are still working hard to make up for their losses, most are like the woman from this News 12 video who says that people who hadn’t visit Coney Island in 30 years came back this year to see the new attractions and be in solidarity with the best amusement park in the world! Some shopkeepers were selling “Sandy Strong” T-shirts! As I said in my post-Sandy blog last year, Hurricane Sandy may have given the place a good punch, but down does not mean out!

So grab a few dollars and jump on the train (all trains lead to Coney I like to say). Rides are open through October, and of course the beach and boardwalk are waiting for you, rain or shine (or snow!) As one of New York’s favorite sons said: “It ain’t over ’till it’s over.” And in Coney Island, it’s never over!

In my inaugural post last year, (Happy Birthday Cyclone and horsing around on the carousel), I introduced readers to an artist who lives not far from me — Jeffrey Briggs, who is the pre-eminent carousel animal sculpture in the world (a small club to be sure!). His most recent, incredible creations appeared in the Boston Globe today. A man after my own Coney Island heart — for sure! Take a look! 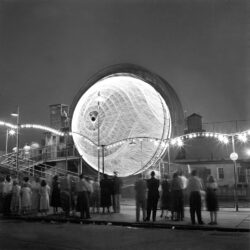 beautiful wonderful photos…..I remember the old days and the classes…
use your eyes not your camera

I love it when you share your memories of that magical place, Coney Island. Time seems to stand still.

We’re fortunate to live where it’s summer pretty much all year, and in a culture in which time is not a tyrant, and is quite malleable.

Hugs from Barbara & me.
Allan