With nearly 400 contributors and over $40,000 raised, the Feinstein Kickstarter project exceeded its fundraising goal by over $5,000 ensuring the publication of his first black and white monograph.

The brainchild of Panopticon Gallery’s Jason Landry and photo collector Jim Fitts, the Kickstarter campaign was launched in late August with 30 days to reach its goal of $35,000. Fitts, who first discovered Feinstein’s work when he was the Executive Director of Boston University’s Photographic Resource Center, has been on a crusade for several years to bring his black and white work back into public view in the wake of the highly visible success of Feinstein’s color work. When Landry bought the landmark Paontopticon Gallery in Boston from Tony Decaneas, he immediately recognized the “hidden gem” he had in Feinstein’s work and teamed up with Fitts to launch the Kickstarter campaign.

In response to the great success of the campaign, Landry commented: “This is just the first step in a strategy to bring Harold’s black and white work back into the spotlight where it belongs. We’re looking forward to what the future holds.” 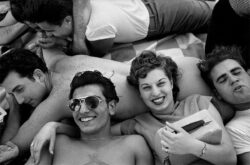