Noting that is was sixty years ago that the Photo League fell victim to McCarthyism, curator Mason Klein pays tribute to the 15 years of Photo League “trailblazing” in the show currently hanging at the Jewish Museum. Entitled “The Radical Camera”, Klein refers to the Photo League members as “a group of young, idealistic photographers, most of them Jewish, first-generation Americans… Their solidarity centered on a belief in the expressive power of the documentary photograph and on a progressive alliance in the 1930s of socialist ideas and art.”

Known for eschewing modernism and embracing honest portrayal of their urban surroundings, Photo Leaguers became the social conscience of their time, probing the realities of ordinary people throughout New York. Feinstein, himself a first generation Jew, was introduced to the Photo League in 1948, became an active member and took one photography class with founder Sid Grossman. Now 81, Feinstein remembers his Photo League days as an exciting time of intellectual and artistic ferment.

“I was only 17 when I joined the Photo League, which was, of course, the home of some of photography’s real giants. My own photographic sensibilities were already completely aligned with the basic orientation of the League, so having a place to co-mingle with others who were focused on showing life as it is was a marvelous impetus.” 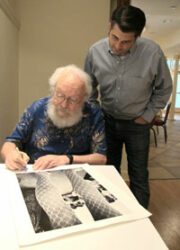