Unearthing buried treasures: Discoveries in the basement, Part one!

I’ve started a new category for these blog posts that I’m calling managing an archive, in the hopes that my own joys and tribulations in this new vocation can be instructive to others. And at the get go here, a shout out to APAG (the American Photography Archives Group), which is wrapping up it’s annual seminar this week-end in NYC. I had hoped to attend, but wasn’t able to this time. Founder Mary Engel (daughter of photographers Ruth Orkin and Morris Engel) has worked long and hard to create an organization that serves as a resource for those of us managing a photography archive. The support has been invaluable. Thank you Mary and her team (Julie Grahame and Grayson Dantzic).

Before Harold died, important steps had been taken to get a thorough picture of his inventory; to catalogue, organize and scan negs, prints, and media, and — oh yes — to make sure they were all signed! As elementary as that sounds, believe me — they weren’t all signed! But it wasn’t until after he died and I needed to pack up our house of 17 years last summer, that the archeological dig in our basement began to reveal some layers of the past unbeknownst to me!

When we moved from New York City to Massachusetts in 1994, it wasn’t the first time we’d moved. In fact we had moved twice before, and I’m sure that some of these boxes had not been looked at since the late 80’s or before! And, since I was in the process of downsizing, it became important to open up every box in the basement and see what could be thrown away. So, with dust buster in hand, plus new boxes, tape and markers, and my iTunes playlist, I headed down to the basement with a ruthless determination to throw out as much as I possibly could from the accumulated “stuff” of a lifetime! I wish I had taken before and after pictures, but it seems to be something I never remember to do! (I’m not the photographer of the family!).

Among the treasures I found were some old show invitations, like the one from a 1959 show with Saul Leiter, David Vestal, Walt Silver and Garry Winogrand (above and below). Or, the poster from Harold’s 1958 show at Helen Gee’s Limelight Gallery in which he dedicated his photographs to his friend W. Eugene Smith (below). Or the one from the Midtown Y show on 1973 (left). As fun as it was to sink myself into these ephemera, which also included old typed correspondence, poetry and press clippings, (more on some of these in another post), it was the box of 16×20 silver gelatin vintage prints that really got my heart fluttering! Every archivists dream! Except…upon opening this treasure trove, nary a signature to be found on any of them! That’s right…beautiful silver gelatin photographs printed by Harold in pristine condition, except for that one essential missing piece! I guess the only good news is that there were only about 20 of these, not hundreds…but still! May this be a word of warning to all aspiring (or accomplished!) photographers and/or those who assist them — always make sure your work is signed immediately! Never put off this crucial final touch! 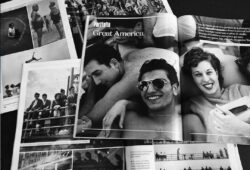