A Love Letter to New York: We Stand With You!

Dear New Yorkers:  Please accept this visual love letter  from one already gone, but who always saw New York and its people through the eyes of love. It was his first muse.  It was his home. And…it surely is his gift to you.

At this writing, the U.S.N.S. Comfort has just arrived in New York Harbor bringing onboard 1,000 hospital beds, 12 operating surgery room, a lab, pharmacy, CT scan and 1,000 military medical personnel.  The last time it docked in the city was after 9/11,  a grim reminder of the fact that NYC has seen more than its share of  disasters.  After 9/11 came Super Storm Sandy in 2012 and now Covid 19, a tragedy of epic proportions and the current epicenter of global pandemic the likes of which seem conjured by a fantasy novelist. The streets of Manhattan  are all but empty, FEMA has sent in refrigerated trucks to assist overflowing morgues and  Governor Andrew Cuomo has just finished his morning press briefing at the Javits Center, a mammoth conference center in Manhattan converted into a 1,000 room emergency hospital. The good news,  according to Cuomo, is that the rate of doubling in the number of hospitalizations for the virus has slowed down from every two days to every six days leading to hopes that the “flattening the curve” theory is working.

To romanticize the notion of “resilient New Yorkers” would gloss over the individual stories of loss, anxiety, grief and fear that comprise the finer brush strokes of this big picture global story.  But just as there is no map and compass for this terrain, we are witnessing incredible ingenuity, grit and guts in  pushing beyond the leadership failures that have left us ill-equipped to deal with this pandemic. Healthcare workers are literally risking their lives and many have already succumbed to the virus.  Truck drivers, janitors, subway conductors….all those performing what we call  “essential services”, all those whose lives and work generally go unseen and under appreciated are the very thread keeping the social seams holding together.  A mounting  “debt of gratitude” is accruing for all these public servants.  So too, the hope that gratitude might serve to re-orient our public and private lens toward life-affirming things that really matter in our grander scheme of things.  Our planetary well-being depends on it.

Still,  there is some kind of truth to the sense of a particularly New York spirit.  While I only lived in the city for a dozen years, and met Harold there while working with a non-profit,  he was born in Brooklyn (Coney Island) and was “always a Brooklyn boy” as he liked to say.  As one of dozens of New York born and bred photographers contributing to the heady mid-century NYC street photography scene (many of them also Jewish and from Brooklyn!),  Harold “cut his visual teeth” in this place that he loved most. Photography was his way of bearing witness to a life steeped in the “rich stew” (as he called it) of America’s most iconic place. I know that he would want to do what he could to pay tribute to a city and its people now living through yet another trial with the verve, pride and countless, often invisible acts of kindness.

P.S. It was my good fortune to discover that George Gershwin’s Rhapsody in Blue, was released in the public domain just this year. A favorite piece of music for both Harold and myself, I think it beautifully captures the complex range of moods and emotions characteristic of the city.  Like Harold,  Gershwin was born in Brooklyn with roots in Eastern European Jewish culture. His Russian Jewish grandfather was from Odessa where Harold’s,  also the home to Harold’s father Louis 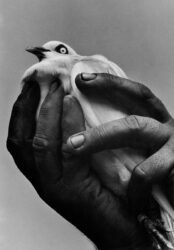 Reflections on vulnerability, connection and art in a time of crisis: With gratitude to my friends