Fifty-eight years ago today: The photography market before there was one!

It’s a brave new world out there in the art market I can’t keep up with it. Last November I had the pleasure of a week-end visit from Ted Forbes, the creator of The Art of Photography podcast. He is in the process of producing a documentary style piece about my work and I couldn’t be more delighted. One of the questions he posed to me related to a recent flurry of on-line debates on the question “Is photography art?”

The truth is, this is a question that has followed the rise of fine art photography since it’s inception. The occasion for this particular round of questioning came from the recent sale of a Peter Lik photograph for $6.5 million. I had never heard of Peter Lik and can only say that $6.5 million is an unimaginable amount for me! (Outside of the world of Peter Lik, the highest selling photograph is Andreas Gursky’s Rhein II, which sold at Christie’s for $4.2 million). Truly the art market is a puzzle to me and I often conclude that I must simply live on a different planet! But I’m all for people making good money from their art!

In the context of today’s market and Peter Lik’s success, this New York Times piece from May 19, 1957, seems almost impossibly anachronistic! And of course, it is! The world of photography in mid-century New York was somewhat of a large extended family. The Photo League had been shut down by McCarthyism. Photojournalism was in it’s Golden Age, but the appreciation of photography as fine art was still in its infancy. Helen Gee’s Limelight Gallery, where I had a show the following year, was the first place in New York where a market for photography began to be cultivated. (See my post: W. Eugene Smith and me at Helen Gee’s Limelight Gallery, 1957) Auction houses would not even begin to feature photographs until the 70’s, but it was really the 90’s that saw the explosion of photography galleries and exhibitions — and a growing market. The extended family of those heady days has expanded to include just about everybody who owns a cell phone! And that’s a good thing for photography. The more the merrier.

How is it possible that I set a record for print sales in 1957? (Oh, if only I could transpose that event of my early life to the current time, but I haven’t yet figured out how to operate that kind of time capsule yet!) Jacob Deschin, the photography writer at the Times had his own explanation. All that I really remember was being 26 years old and the thrill of having 400 people come to my opening. I had not been informed about the piece in the New York Times and suddenly began getting congratulation calls. A year later, H.M. Kinzer in the 1958 Photography Annual wrote:

Reading this now it is laughable to imagine that fifty prints would sell for $1200! On the other hand, as a boy I could spend all day at Coney Island for 35¢! What would be really fun is to wake up on May 19th next year and see a similar headline! Can someone please tell me how to make that happen?

In the meantime, congratulations to all those who have known the joy — not just of selling, but of making photographs. Having them exhibited so that others can partake of the joy is even better — whether or not they sell. Having them sell, so that you can make a living is the best thing of all! 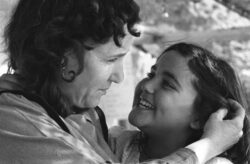 Saw the carousel shot and had to tell you I’ve not seen that one before from Harold. BUT I do have an image that is sooooo similar (which I emailed you) taken at Rye Playland. Amazing all these years later and the images are too close for words! Wish I knew how to upload the pic…..

This fine article by Jacob Deschin (I recall him) is quite a time piece. It reveals so much about iconic photography, particularly the slices of life you have a gift for, and what truly touches the heart and soul and mind of the ordinary viewer.
Congrats on what happened way back when. Some people never receive this sort of recognition in their lifetime, but you were applauded when you were so young.