What’s the July 4th week-end without Coney Island? Will apple pie be the next to go?

“We cannot and will not allow the clock to turn back on Coney Island.” (City Councilman, Mark Treygaer, New York Times, May 21, 2020)

When commentator Dave Marash opened Nightline’s Coney Island special 25 years ago today, he led off by noting that eviction notices  were taking place threatening Coney Island’s Sideshow by the Sea.  The action elicited this comment from Dick Zigun known as the unofficial  “Mayor of Coney Island”, and the head of Coney Island USA, which produces Sideshow. He said then:

“It’s a question of whether blue-collar art has as much right to survive as elite art does.”

Fortunately, and in keeping with legendary Coney Island resilience,  the Sideshow was saved. Yet his question is as salient today as it was then.

Now,  25 years later to the day,  Coney Island may be facing one of its most difficult challenges ever —  one which may could involve new eviction notices for pandemic ravaged businesses on the boardwalk.  In a  recent New York Times feature written by Lauren Vespoli, on the fate of Coney Island entitled  “Can the ‘Melting Pot of Humanity’ survive this?“,  she stated:

“The coronavirus outbreak has hit at an inflection point for Coney Island, which over the past decade has seen a surge in development and ensuing gentrification since its 2009 rezoning, as well as the widespread destruction of Hurricane Sandy in 2012. The neighborhood is also already struggling with high storefront vacancy rates.”

And still as one reads through the piece,  the spirit of communal solidarity among Coney Island’s stalwart ring masters stands out.  No Mermaid Parade?  Dick Zigun, who heads the non-profit in charge of the parade decided to enlist those who would otherwise be sewing costumes to undertake a mask making contest.  And he has taken to donning  a top hat and “mayor” sash to give weekly “State of Coney Island” addresses online.

Then there’s the Dennis and Steve Vourderis, second generation owners of Deno’s Wonder Wheel Amusement Park  a Coney Island landmark celebrating it’s 100th anniversary this year. A three day centennial celebration had been planned complete with a performance from the Broadway cast of “Wicked”.  The Wonder Wheel is a 15-story feat of engineering in the form of a Ferris wheel, with swinging cars and panoramic views of both city and ocean.  In anticipation of an opening sometime this summer,  they plan to hire sanitizing crews to go from attraction to attraction wiping down anything visitors touch, hand-sanitizing stations, a touchless ticketing system, and markers to keep guests six feet apart.

Until then,  the Vourderis family is creating a video series called “Deno’s Days of Distancing Together”.  Here’s the first installment and you’ll find the others with it on You Tube!  Excellent!

I hear echoes of Harold’s own eternal optimism in these words from Dennis Vourderis:

“Coney Island has the advantage of fresh air, sunshine, and the beach. When I stand out on the boardwalk and I’m looking out at the ocean, it just has such a calming and reassuring effect that everything will be OK.” 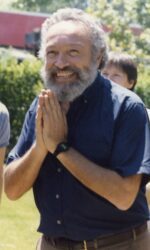 Five timeless years: Describing the state of our soul