Dignity and the human spirit

I’ve had the pleasure in recent months to begin reviewing the many hours of audio-visual and written materials from Harold’s classes, lectures and personal journals. In fact, it’s been both exciting and daunting! So much great material of historic importance in terms of the era and time in photography, but also his approach to teaching, which had mostly to do with his passion about the creative process within each individual. What is it and how do we liberate it or block it? As I work toward consolidating his archive of nearly 70 years, these materials add tremendous richness and depth to understanding the life of the artist.

Of particular interest has been discovering his commentary on particular photographs which can be used to create an audio narrative to accompany exhibitions and virtual offerings of his work. The photograph above, Haitian Man and daughter, 1949, has always been a particular favorite of mine and I came across this commentary of the photo from a gallery walk-through with curator and students from Penn State’s Zoller Gallery in 1989.

You can listen to Harold’s commentary here.

The dignity of faces. Two beautiful souls…Look at that wonderful hand he has. And look at her face. It’s like old Renaissance babies that you see in old paintings…small details, the fineness of it. Beautiful people…beautiful people! You see, you have to see people through the eyes of someone who loves them; from their lover, their wife, their child. You have to see them as if you were that close…and see the sweetness. And we forget that. We have attitudes…to age groups…to racial groups…whatever it is. And then we’re no longer responding to that soul.”

I will share more photo commentary by Harold occasionally in this blog, but one reason for choosing this one at this time is that it coincides with a recent email I received from my friend Dana Gluckstein, a marvelous photographer whose amazing journey photographing indigenous peoples’ from all over the world is a palpable example of responding to the soul of the person. Her book released several years ago in conjunction with Amnesty International, Dignity: In honor of the rights of indigenous people (powerHouse books, 2010) celebrates Amnesty’s 50th anniversary and was partially responsible for tipping the balance in getting the U.S. to finally sign the Universal Declaration of the Rights of Indigenous People.

I came to know Dana in the mid 80’s when I was running a non-profit dedicated to developing creative partnerships for social change between young people from warzones and those from the U.S. Dana became an advocate and organizer of that work in Los Angeles. Upon entering her lovely home, I was stunned by the profound presence of a 36″ x 36″ photograph of two tribal women from Kenya. It was dignity personified and clearly reflected the bond between photographer and subjects. Dana says:

“What I try to do with the camera is to stop time; to create an authentic moment — an exchange between human beings that says ‘We are all one. We really are the same. Photographing is like meditation. It’s all in the breath. In being present'”

Harold used to say “Seeing is an act of prayer, of absolute appreciation of the gift in front of our eyes.” I introduced Harold to Dana’s photography many decades ago and he became a huge admirer of her work and appreciated the kinship they shared in their way of seeing. I’m grateful to them both for consistently seeing through the eyes of love.

Dana’s remarkable body of work has been showcased at the United Nations in Geneva and has toured through Europe. It is now on tour throughout the United States. Be sure to get the book. If you can see the show, all the better. Links are below. 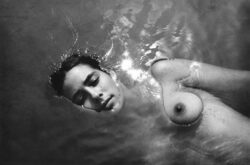 Judith,
Thank you for this wonderful posting sharing such important things we all should appreciate about Harold and his work. He was not only a great teacher of photography.
He taught about the importance of seeing with the heart as well as the eyes to appreciate beauty in nature and in all human beings. Muchas gracias.

These photos and commentary made my heart open and sing. We can see into their souls. Your blog and writing is so beautiful, Judith, and I love how you’ve brought out the connection to your own amazing work in social justice! It all comes together. With gratitude for sharing all this wonder!

This latest blog is, for me, one of the most moving and important. Hearing Harold’s commentary and reading Ms Gluckstein’s remarks were a gift on a day when I am feeling I have lost my way. Many thanks and lots of love.