Earth Day at 50: A Hush Across the Land

The morning breeze has secrets to tell you. Do not go back to sleep.  Rumi

Could any of us have imagined that the 50th Anniversary of Earth Day would arrive like this? The global “pause button” has been pushed. The Earth is breathing? Can you hear her?

The Pandemic has created multiple realities for Earth’s human inhabitants. Front line healthcare workers live adrenaline powered 18 hour-per-day realities locked in a fierce battle to save lives without the necessary resources to aid them. Too often their own lives are compromised. We pause to thank them for their commitment and sacrifice.

Hundreds of thousands of people are grieving the loss of loved ones. We pause and give comfort to them.

Poor people, mostly brown and black, struggle in cramped quarters, in refugee camps, in homeless shelters and in under-served communities already burdened by racism and inequity. They are dying in disproportionate numbers. We pause to acknowledge their suffering and the injustices that fuel it.

And some of us, myself included, have the luxury of appreciating the coming of spring flowers and the sounds of nature so gloriously clear now that the humming drone of cars, planes and industrial machines is largely absent. If you’re in the latter category, then your personal reality includes the possibility of pausing to reflect more deeply on aspects of existential importance that are generally buried by the distractions and addictions of a consumption driven society.

What really matters? How do we want to live into the future in order to leave a legacy of transformed relationships with the Earth and all her inhabitants?

In a recent interview with columnist Mary McNamara of the Los Angeles Times,  journalist Alan Weisman, author of numerous classics on the state of the global environment, said:

“People are suspended between terror and wonder.  They’re terrified that this is all so fragile, but they also realize there are things we have been missing — the birdsong everyone is noticing, the beautiful skies — and that those things are important.”

Weisman’s 2007 book, The World Without Us, was called by 350.org founder, Bill McKibben,  “...one of the grandest thought experiments of our time, a tremendous feat of imaginative reporting.”

And while I would never wish to even imagine the demise of humans on this planet, the “thought experiment” has a certain saliency in this historic moment as we are being given the opportunity, en masse, to get a glimpse of what it means to the non-human inhabitants of this planet and the Earth herself to be liberated from the incessant industry of human activity – the noise, the pollution, the careless disregard or simply the unawareness of non-human life.

Dozens of videos are being posted of wildlife entering now deserted streets,  seeming to know that they are at least temporarily safe from an encroaching human population. Photographs of clear skies over Los Angeles, swans in the now-quiet canals of Venice, coyotes roaming the streets of San Francisco, or the sudden reappearence of the snow-capped Himalayas that have disappeared behind smog for thirty years, are all gifts to our imagination.

We are glimpsing a dream that we may choose to keep as a reality when we awaken on the other side of the current planetary initiation.

I am not a humanity basher. I do not believe our species has a fatal flaw. In fact, I think it’s crucially important to celebrate the goodness, kindness, generosity, compassion, commitment and courage we see in ourselves and our fellow human beings each and every day – to counter the negative narrative that we often unconsciously ingest and then pass on to others. That narrative is a part of what keeps the nightmare alive. At the same time we must realize that our vision and our intuitive knowledge of our place in the natural order of things has been occluded by greed and a global culture of consumption and corruption that have taxed our Only Home to its limits, and brought massive poverty and despair to billions. The current pause has brought a hush upon the land, so to speak. And, yes, there will be a return to commerce and activity again…and no one knows what that will look like. No one yet knows the ways in which the gifts of this moment may have infiltrated the collective consciousness. Will the frenzied, consumer-driven trance-dance start back up again as if nothing ever happened?  Or will we move toward a new kind of sobriety and maturity drawn out of us by the quiet language of nature? Will the medicine of bird song and clear skies stir us in ways that awaken a more primal instinct to honor and protect the beauty we’ve been given –to embrace our birthright of dwelling  joyously within the living web of this utter magnificence, which is this Earth, in mutuality and symbiotic embrace?

Will this unprecedented global phenomenon make it clear, once and for all, that we’re all interconnected and her health is inextricably linked to ours?

Gratefully, global climate change movements are gaining momentum. Eco-initiatives of all kinds are taking root across the globe. New, life affirming technologies, fuels, and systems are emerging that cooperate with nature. More and more people are quieting their minds and reaping the gifts of inner stillness. More and more people are honoring indigenous ways of knowing that attune us to the languages of nature and remind us that we are just one citizen species in this planetary community. Humility is required. This is not romanticism. The shift that is occurring now is an awareness of something true and real. I am hopeful.

Almost every summer I head to the north woods of Maine where my spiritual home awaits me. I discovered Mooselookmeguntic Lake (affectionately known simply as “Mooselook”) in the late 70’s. Earlier in my life I had worked as a wilderness expedition leader taking people into the wilds of upper Ontario and the James Bay. The opportunity to enter into truly pristine wilderness is one that shaped my consciousness more than almost anything else since. Unmediated awe — the kind that brings tears — was an ever present experience.

In that place, one meets the Unknowable in a way that only a communion with wild things can render. Our “civilized” costumes fall away and we stand in utterly naked aliveness, senses wide open, aware only that the meaning of existence is speaking to us.

After leaving that work and moving on to other things, I sought out some place I could go on a regular basis to be nourished by awe and humbled by beauty. I found it. And among the gifts of Mama Mooselook is the community of loons that live there. Loon lovers are a tribe. Perhaps you are among them. And, if not (and also if you are!),  I invite you to take a moment… to listen, be still and breathe…and allow their haunting and ancient call to touch your earth-embedded creaturely soul.

The rest will unfold in right order…

The call of the loons on Mooselook Lake,  August 2017. 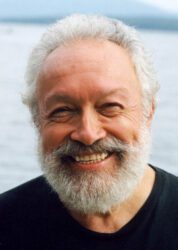 Good Wednesday morning, Judy – I read your post while sitting on my dock watching, and listening, to the wild things. I felt cleansed and a haiku came into my thoughts –
Who am I today?—Searching for authentic self —Clearing out the dross.

Thanks dear Anne! I’m imagining you there on the dock with the wild things! “Clearing out the dross” indeed! Sending love through the ethers! xoxo

Dear Judith – Hearing your own impassioned and eloquent voice this morning was a joy. I share your sorrow, concern, hope, and love for our wondrous home and all the beings that are apart of it. Heart to heart, I give thanks for you. With a lightful embrace, Barbara

My dear Barbara: Thanks for your comments! I know we share the same heart space when it comes to caring for this planet and all its inhabitants! Bless you dear friend. I think a conversation soon would be wonderful!

Many are sick and are to be mourned, but there is much behind the scenes here that we are not told. Explore before you decide what is really happening here, and why.

This is just lovely, Judith. I am remembering the beautiful flower photos by Harold that we published in Kosmos Journal. They are infused with warmth and love and touch the soul deeply.

Thanks Nancy: Lovely to hear from you and so glad we’ve reconnected! Yes…Harold’s work was no unmediated. Came right from the soul always with no mind-censor. I feel blessed to have the archive as a way to continue to speak with him everyday. Sending gratitude to you Nancy, for the truly beautiful publication and community you have mid-wifed. Best always — Judith

Thank you, Judith, for sharing these peaceful, thoughtful moments.

Glad you enjoyed it Audrey. Thanks for tuning in!

Such a beautifully written piece. Allan and I loved it. We love you.

Thanks Barbara. So glad you liked it! Sending love to you and Allan!

Dear Judith,
Yesterday you asked me about my retreat experience and I tried to tell you with my simple words. But
today I read your piece and you so eloquently described my own experience:

“Unmediated awe — the kind that brings tears — was an ever present experience.
In that place, one meets the Unknowable in a way that only a communion with wild things can render. Our “civilized” costumes fall away and we stand in utterly naked aliveness, senses wide open, aware only that the meaning of existence is speaking to us.”

Thank you for sharing.
Love,
Dyan

Thanks dear friend! So glad it rings true for you…the inner and outer wilderness are mirrors of the same emptiness. Pristine, alive and awesome.
Love you Dyan…