Harold and his Leica

65 years of photographing / Current events
cameras / Coney Island / exhibitions / W. Eugene Smith
I’m headed out to Los Angeles next week to represent Harold at the opening of his show Harold Feinstein’s Coney Island at the Leica Gallery LA. It will be the first show since his passing in June, so I’m eager to be going and hope to see any of our LA friends at the opening September 3rd! The opening will also include the wonderful work of Al Satterwhite.

Shortly after receiving the invitation from the Los Angeles Leica Gallery, Harold received another one from Leica Sao Paulo for a show there next February and shortly after that a friend sent on the story of the Leica Freedom Train. Since all of these happened independent from each other, it seems like Leica is in the air.

Over the years I have interviewed Harold about many topics, including the various cameras he used. (For other posts about cameras, see links below). With two exhibits coming up and an interest in the Leica legacy, I sat down with Harold earlier this spring and got his recollections about his Leica cameras

From Harold: “Of course, in the early days of the 50’s and 60’s, Leica was the work horse for all photojournalists. I don’t know if that’s true today, but I’m guessing it’s right up there are the top. I was always so envious of those who had one, but as a young photographer, and generally broke, I simply couldn’t afford one. But, that brings me to yet another story about W. Eugene Smith. Not long after I started going to Photo League meetings in 1949 Fritz Henle and Arnold Newman both suggested that I meet Gene, and I did. It was one of the most important relationships of my life.

He had a number of Leicas of course and one day when we were in a taxi together he told the cab driver to stop in front of a store called Mini-Film (can’t remember where that is). He took me in and bought me my first Leica — a used IIIc with an Elmar 3.5 lens. This is just another example of his incredible generosity, but also his mindset; his way of helping people he believed in.

So, I loved that camera. What I loved about the Leica – it was simple and formidable – the body was made like an iron horse – relatively indestructable. It became an heirloom for so many, and was often passed down from generation to generation. In addition to the Elmar 3.5 lens, which was a bit slow for me, I had a Sonnar F2. Many of my greatest shots at Coney Island were with my Leica and it’s the only camera I brought with me to Korea. So, the whole Army Draftee series is shot with that Leica.

The other reason I love Leica as a company isn’t even related to the cameras per se, but rather the historic aspect. It always feels good to support a company that sees beyond its profits. I hadn’t really known about the Leia Freedom Train until recently. I certainly didn’t know about it when I got my first Leica. I don’t think anybody really did. I just knew it had German precision and all that. When I found out that Ernst Leitz and his family helped save Jews during the war by sending them to work in New York and other places for the company, that added to the appeal of the camera for me. It’s just nice to know you’re holding something in your hand that has that kind of story behind it — in addition to being a great camera! 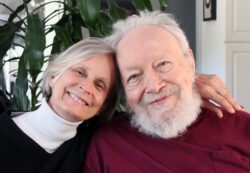 Life is on your side: My last week with Harold

Hi Judith, So glad you are keeping the blog going, It is one of the best ways to remember Harold and his tremendous contribution to photography! Barbara and I wish we were going with you to LA for the opening and are looking forward to seeing you in September!!! Hugs, Allan