Roses and prayers for Therese on Mother’s Day, 2020

Today we celebrate mothers. And yet it’s a different Mother’s Day than any of us have every known. In too many cases the joyful gatherings that we may have been used to on this special days are being replaced by zoom calls. In too many cases,  elder mothers and grandmothers are requiring a new kind of  tender and vigilant protection from their children, their caretakers and their societies as we pass through the shadow of Covid-19.

On Mother’s Day we celebrate the courage, sacrifices, love, guidance and sustenance we have received personally from our own mother (if indeed we have). But beyond that, we have the opportunity to consider and to honor the paramount role mothers play in cultivating and sustaining our familial, social, and cultural values.  How we treat and support mothers (and good parenting in general) becomes a crucial litmus test for the future well-being of our societies.  I am grateful for my own mother,  Betty Shaler Thompson (1919-2002) and for the beautiful mothering that has been passed down through my sisters and their daughters.  The third generation thrives even as we benefit from the unknown matriarchs of our ancestry.

Today I want to honor another mother. One who has exemplified for me and for her own family, the highest qualities of what a mother is and can be.  Therese Rugwizangoga  was born in Kibuye in the Western Province of Rwanda. Growing up her family experienced the violent turbulence of ethnic conflict in 1959 and 1973.  She married at 23 and her husband, a veterinarian, died in 1989, leaving her with nine children.  In 1994, she lost her three eldest children to the Rwandan genocide. Her remaining children speak of how she remained a calm and stabilizing protector during this period,  often in hiding with some of  her children. Her prayers, steadfast faith and perseverance saw them through the ravages of the genocide and continued to be their strength and foundation as slowly each member of the family began to rebuild their lives.

I came to know Therese through her son, Ernest, who arrived in the US in 1997 after surviving the genocide, living in the refugee camps and deciding, with his family, to come to the U.S. and establish a foundation for bringing other family members,  which he did. I had worked for several decades with youth leaders from war zones and I learned about Ernest from an article in the Boston Globe and got in touch with him. We have been close friends ever since. He has used his own life experience as a source of inspiration and motivation for others as a youth organizer in Boston and is now getting his Masters in Social Work specializing in trauma healing among immigrant communities. Shortly after his arrival, his sister, Egidia was able to come to Boston, where she became a nurse and is now clinical manager at the University of Maryland Medical Center. Both Ernest and Egidia have returned to Rwanda more than once. Ernest founded the Rwandan Youth Healing Center and Egidia joined Team Heart, a group of doctors and nurses providing assistance in cardiac care in conjunction with the Rwandan Health Ministry. (Read this article “Out of Suffering, a Call to Nursing” in the Brigham and Women’s Hospital Newsletter.)

Therese arrived in the U.S. in 2008 on the occasion of Ernest’s marriage to Marie Chantal Mukandatimana!  She brought with her a gift for me. Ernest and Chantal had asked me to be their matron of honor and Therese made a beautiful traditional dress for me and brought it from Rwanda!  It is a cherished possession.  And, while she spoke very little English at the time, it became clear to us both that ours was a deep sisterhood that would (and did) continue to deepen. In 2017, after working entry level jobs at various Boston retail outlets, learning English and continue supporting her children’s educations and aspirations, Therese graduated from UMass Boston with a BA in psychology and sociology. After seeing all of her children through to their distinctive achievements , she was finally able to add to her own roster of success — mother of nine, grandmother of seven, survivor, provider of hope and strength, motivator and sustainer…and college graduate.

Several weeks ago,  I heard from Ernest, who now lives in California, that Therese had been taken to Boston Medical Center, where she has been in the ICU for the past three weeks. Egidia flew up from Baltimore and family and friends hold vigil with prayers for her recovery.  It is slow, but the prognosis moves toward hopeful

I last saw Therese in 2018 in her home in Dorchester.  She gave me a drawing that she made and a beautiful aqua blue teapot. It is my greatest wish that I will be able to serve her tea in my home later this year.

Please add your prayers to the steady recovery for this beautiful mother.  She has given so much to others — including myself,  and is now needing to receive our healing energy.  Happy Mother’s Day Therese!  You are truly a mother among mothers!  May God bless you with many more years to come! 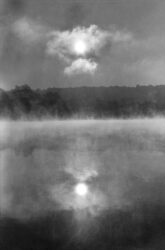 Earth Day at 50: A Hush Across the Land

Yes…she is truly a beautiful soul. Thanks for your comment Sonia!

I’m praying for your good friend, Therese. I hope she will recover soon and fully. All my best, Judith.