“What’s a selfie?” and other thoughts about self-portraits

In 2014 when Lumiere in Atlanta was exhibiting View from the Street: The work of Vivian Maier and Harold Feinstein we were simultaneously editing contact sheets with an eye toward remaining images to be printed in limited editions. We had the help of some curators and dealers in the process. A few of the self-portraits caught the eye of Lumiere’s gallery director Tony Casadonte, particularly in light of the “selfie phenomenon” and the recent popularization of the Vivian Maier self-portraits. The photo above is one of them. I just posted it in the Recently Discovered Images section of this website with some more background about it.

As interest in the above image grew, I sat down with Harold in December 2014 and said “Let’s talk about selfies”, to which he responded: “What’s a selfie?” Here’s more from that conversation, which I took down as he dictated it.

“Photographers are always seeing and using light. Light reflected off surfaces, faces, objects. Back light, front light, light coming through things — like windows or curtains. Especially when taking photographs in the streets, which are lined with storefronts — windows often provided the opportunity to get different perspectives within one frame — the reflected plane and the objects inside, which makes for a wonderful collage. Lee Friedlander is known for his storefront images that combined so many elements of vision within one frame.

Mirrors give you back the whole image and sometimes offer two directions to see from…and getting oneself into the image is a temptation for everyone. I guess that’s become a signature for the Vivian Maier phenomenon also. Sometimes, like in this picture (Man in the mirror, 1964, above), you can get reflections from both the mirror and the glass, which gives multiple perspectives on the subject (in this case, me) while adding other elements to the composition as well.

From what you’re telling me, today’s “selfies” are basically snapshots made while holding the camera at arm’s length and snapping. I don’t know of many photographers from my day who did that, though I’m sure there were. But, as a social thing I think it’s great that so many people have access to cameras on their phones now, so I’m sure that selfies are here to stay. It may not be great art — and some of it is! — but it’s fun, and that’s okay by me. The more the merrier! ”

Postscript on the “fun” aspect! This just out yesterday in the New York Post: “More people die from selfies than shark attacks!” (The lesson: don’t take selfies with bears or while driving a car….really?) 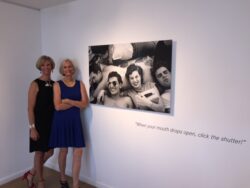 I grew up in sheepshead bay bklyn. Sheepshead bay and Coney Island were neighborhoods I began photographing and I continue to return there and photograph, 50+ years later. Coney Island after hurricane Katrina was almost unrecognizable. But she peaked out through broken boardwalk boards, from around sand piles on sidewalks. The Rides remained…..the Parachute a beacon for those who’ve known, loved and photographed this most wonder filled place. A Brooklyn girl no matter where I am. Gail cohen

Very nice comment, Gail! Were you perhaps referring to hurricane Sandy? Anyway, how lovely to have known Coney Island more than 50 years! As a Brit, the seaside funfair I remember from that era is pitiful in comparison to the scale of Coney Island wonders you enjoyed (though not pitiful in the amount of pleasure it gave little me!). And aren’t Harold’s fresh, liberating thoughts on selfies, at the age of over 80, inspiring!!! 🙂

Judith, thanks for keeping this going. I really enjoyed reading Harold’s take on the selfie phenomenon. And, of course, the photos!