Evolution of an iconic Image: Boardwalk Sheet Music Montage, 1952 to 2020

Just recently I made the decision to release the first estate print from the Harold Feinstein Photography Trust. I made this decision because this iconic image — unknown until 10 years ago — has sold out as a signed contemporary print while inquiries about it exceed that for any other image. I have been deliberating about producing estate prints for many years and the timing seemed right for this one. Printed in a limited edition of 15, these 20 x 24 silver gelatin photographs of Harold’s iconic Boardwalk Sheet Music montage are now available through Carrie Scott & Partners in conjunction with the David Hill Gallery. The story behind this image and how it evolved as a photomontage and an icon is the subject of this post.

Harold began making photomontages quite soon after picking up his first camera — a Rolleiflex Automat, Model 3, in 1946 at the age of 15. Some of his best known images were laboriously made in the darkroom using multiple negatives. In 1957, Herbert Keppler, the editor of Modern Photography, asked him to write a piece about how he created montages. Among the images shared in that piece are Pigeons, 1956, created with nine negatives, Boys Diving Into Surf, 1954 and Boys Running into Surf, 1954, each with 3 negatives. (You can view the article here.) But, by far his most famous montage, Boardwalk Sheet Music, 1952, was made using six difference frames from two rolls of film (one of which you see above).

The precursor to this iconic image first appeared in the New York Times in 1952. 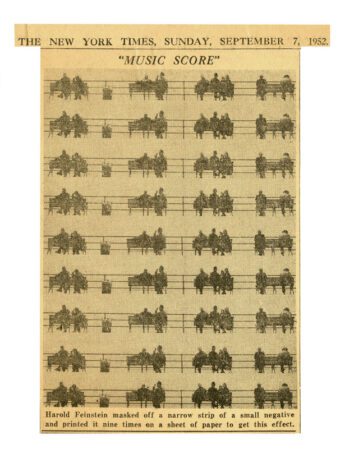 This original photomontage, Music Score,  was picked up in two other publications in 1952, and the caption on one quotes Harold as saying: “A pattern picture, no less that anything else, should have…’something else’ too…”

Speaking about the image in a 2013 blog post, Harold remarked, “The truth is — I hadn’t initially “seen” the music of this photograph until Jacob Deschin put his own name, “Music Score”, on it for his column. I simply liked the design. But once the true personality of the photograph was revealed I realized there was another melody waiting to happen here. While the first image — a repetition of lines — evoked a chant or a bass line for a song, I went back to my contact sheets and began to pull out other frames and put them together in a new montage melody.”

One of the difficult things about working with a deceased artist’s archive is that he isn’t around to clear up some questions about what happened next! When exactly did he create the second montage ? What we know from the original contact sheets that contained the other elements of #2 montage (above), is that he had marked that sheet with the “featured” top image. And that one contact sheet, #CI-102, contains 5 out of the 6 frames used to make Boardwalk Sheet Music. It seemed logical the that 6th frame (which was the original frame used to construct the first montage printed in 1952), would be on either CI-103 or CI-101. But it wasn’t.

A deeper dive into the Lightroom catalogue of digitized contacts finally turned up the missing negative on a roll of film with otherwise unrelated images and numbered completely differently.

Managing an archive also means “learning the language” of the photographer’s own cataloguing system. In Harold’s case, while there is a logic that “mostly” prevails, there are also those curve balls in the system, which take time to de-code and learn. This contact sheet was marked  Mj-22 *** Coney, which was Harold’s way of designated major portfolio negs, which he put in a special place…sometimes! To complicate things further, the dates for this contact sheet don’t match up with the others, since other key images from this roll — Harold with his Rolleiflex, Boy on Father’s Shoulders (bottom left) and Romanian Girl with Curtains, have all been dated 1949, 1951 and 1948 respectively in LR. But this is a topic for another blog post, since dating photographs from deceased photographers is not an uncommon dilemma! (In my case, it can likely be resolved via some forensics involving going back into the original negative sleeves and not relying on the digitized contacts. Still, some real sleuthing will be involved!)

In any case, regardless of when he actually put the Boardwalk Sheet Music together, we can see his notations on the contact sheet from 1952 and presume that he began work on it shortly after the first montage.

It was decades later that the image resurfaced among a box of test prints from decades earlier, though the original copy negative was never found. (Some explanations for this could come from the fact that he was drafted into the Army in late 1952 and sent off to Pusan, returning a year later when the war ended. It’s easy to imagine that this interrupted his flow.)

Nonetheless, that serendipitous discovery led to what has become a late blooming iconic image in Harold’s oeuvre. A high-resolution scan of the test print was produced so that the contemporary editioned print could be printed by our friends at Digital Silver Imaging in Belmont, MA. Alas, our budget being what it was at that time, only 10 out of the declared edition size of 20 were ever realized. How I wish I could push the re-wind button on that one.

Once the image was placed in our website and social media feeds, its popularity exploded. First came the collaboration with Radyo Acik in Turkey, which we’ve posted about numerous times in this blog. (See links below). Agreeing to forgo any licensing fee in 2013, in order for Turkey’s only independently run media outlet, Radyo cik, to use the image for its branding of the Music of the People campaign, the resulting artwork went on to win gold medals in the world of advertising. (Also here.)

In one of his posts announcing the collaboration he said: “It’s my strong conviction that Coney Island is and always will be “the peoples’ playground” — a place where people of all backgrounds come to have a good time. In like spirit, Acik Radyo seeks to empower and encourage the voice of the people through its programming and to extend that voice beyond all borders. That’s music to my ears! Wishing them all the best with the campaign!”

In spring 2014, Harold was contacted by Curator Anastasia Lepikhova at Lumiere Brothers Center for Photography in Moscow. She learned of Harold’s work because Boardwalk Sheet Music went viral after the 2013 Radyo Acik campaign. The connection resulted in a 100+ print retrospective in Moscow in September, 2014, which was a huge success, and sponsored by Harpers Bazaar magazine. It was the first time the image had been exhibited. The show also featured a whole wall dedicated to Harold’s photomontages. It was the last show Harold was able to “see” (via Skype) before his death in June 2015.

Next up, in 2015, shortly after Harold died,  we had contact from a group of architects designing the new building for the Coney Island Brewing Company on the Coney Island boardwalk right next door to the  MCU stadium, home of the minor league Brooklyn Cyclones baseball team. The plan was to use the photograph in blown-up panels throughout the building. For over a year, studio manager, John Benford, worked with the firm Jack L. Gordon architects to help materialize a vision illustrated by the drawings below.

Alas, the project was never completed when it was determined that the expense of producing the panels exceeded the budget.  Nonetheless, it was this project that led John to painstakingly recreate the montage digitally through rescans of all the original negatives (and thus the process of seek and find described above) to create a 2.06 gigabyte file.

In February 2017  Galerie Thierry Bigaignon launched Contagious Optimism: Harold Feinstein in the 40s and 50s which proved to be a fantastic show on so many levels!  The image nearly sold out completely and I needed to put a hold on the last several in the edition, which would’ve sold had I allowed it. These will be saved for museum collections, which has been my policy.  Other venues, such as the O’Dea Gallery space in Istanbul, which also staged a magnificent retrospective, Harold Feinstein, Legacy of a Master in May 2017,  continue to feature the image and get similarly eager responses to it.

In the last five years, inquiries about this image have exceeded those for any other. It’s been unfortunate not to have any more signed prints to offer! Thus, I decided  to release the estate prints.  This comes after discussions with curators Carrie Scott and David Hill during their recent show Boardwalks, Beaches and Boulevards.  Opened in mid-February prior to Covid shut downs, the show was doing really well and receiving some great sales and publicity.  Then came the lockdown, followed by a re-opening in mid-June accompanied by renewed publicity, including this great placement at the top of the  Airmail News monthly recommended arts offerings, which featured Boardwalk Sheet Music, and once again created a demand for the image.

Like others in the art world, Carrie and David needed to  think creatively about how to go virtual and create good on-line content. This led to a great opportunity for a premier Feinstein showcase via Soho House, an international membership club with 190,000 members.  For two weeks, Soho house members were treated to an exclusive screening of a specially produced excerpt of Last Stop Coney Island together with a dialogue between filmmaker Andy Dunn and curator Carrie Scott.  Also included in the Feinstein event was the first public screening of A Walk Through with Harold Feinstein, taken from a recently discovered audio commentary of Harold walking through a retrospective show at the Zoller Gallery (Penn State) in 1989.  Carrie and David cleaned up the sound and paired Harold’s comments with the images themselves, recreating the gallery walk with Harold. Brilliant!  Finally, to top off the event,  Soho House members became the first to learn about and purchase the just released estate print!  Sales were made and more are now available to other collectors.

What’s next for this image?  Who knows!  It seems to have a life of its own!  I think the spirit of the image was summed up in this final anecdote.  In 2014,  the University of Amsterdam, used the Radyo Acik campaign as a case study for their course in Visual Metaphor for their marketing and communications curriculum.  After the Gezi protests in June 2013, Radyo Acik decided to remind their audience of the universal values they try to represent. Here’s how the course designers at the university described it.

The [Turkish]media was under pressure, and the situation was casting gloom over the society. The main aim was to focus on the hopeful and the positive as Açık Radyo always does. The incidents had brought together people from all walks of life, proving we can coexist. The work had to reflect harmony. The imagery needed to be sharp, elegant and to the point. Upon searching, Havas copywriter, Merve Selamet, discovered that Harold Feinstein’s collage was a perfect match for task. In this work, the image showed a score sheet made up of people. They are a part of the same melody.

That message is close to Harold’s heart and I know if he were alive during this time of trials and tribulations he would be overjoyed to have any of his images used as a way to bring people together!

Walk Through a Gallery with Harold Feinstein: A Lockdown project from Carrie Scott and David Hill Gallery 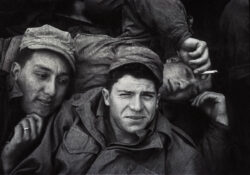 “They were all missing someone”: Harold Feinstein’s Korean photographs, Veteran’s Day 2019 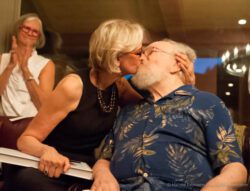 “It’ll always be the first kiss”: Memories for Valentine’s Day 2019